The potential of water shortages in many parts of the world is sobering. This report from the InterAction Council must be shared worldwide.  – GRM 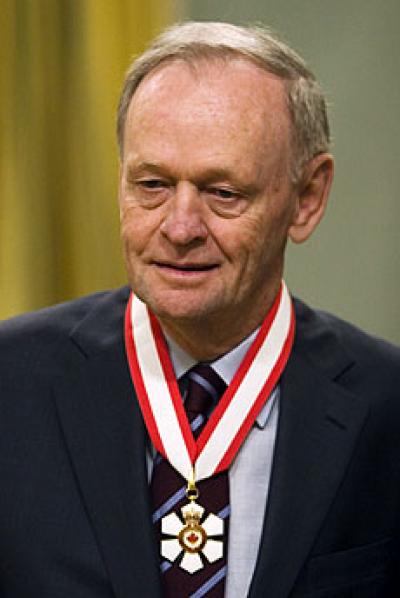 Former Canadian Prime Minister Jean Chrétien co-chairs the InterAction Council, a group of 40 prominent former government leaders and heads of state. The IAC launches a report on water and security this week with the United Nations University’s Institute for Water, Environment and Health, and Canada’s Walter and Duncan Gordon Foundation.

“The world today confronts a water crisis with critical implications for peace, political stability and economic development, experts warn in a new report being launched Sept. 11 jointly by the InterAction Council (IAC), a group of 40 prominent former government leaders and heads of state, together with the United Nations University’s Institute for Water, Environment and Health, and Canada’s Walter and Duncan Gordon Foundation.

“The future political impact of water scarcity may be devastating,” says former Canadian Prime Minister and IAC co-chair Jean Chrétien. “Using water the way we have in the past simply will not sustain humanity in future. The IAC is calling on the United Nations Security Council to recognize water as one of the top security concerns facing the global community.”

“Starting to manage water resources more effectively and efficiently now will enable humanity to better respond to today’s problems and to the surprises and troubles we can expect in a warming world.”

The new report on water and world security is released as Foreign Ministers of several countries prepare for a scheduled special discussion of the topic this month on the margins of the UN General Assembly. UN-Water, a coordinating body for water-related efforts by all UN organizations, will also convene a meeting of experts in New York Sept. 25 to identify key avenues through which such concerns should be addressed, including the Security Council.

“As some of these nations are already politically unstable, such crises may have regional repercussions that extend well beyond their political boundaries. But even in politically stable regions, the status quo may very well be disturbed first and most dramatically by the loss of stability in hydrological patterns.”

In an exhaustive compilation of the many factors contributing to deteriorating water security worldwide, 23 eminent international water expert authors identify a host of serious security, development and social risks associated with the water crisis, including food, health, energy and equity issues.

Already, approximately 3,800 cubic kilometers of fresh water is extracted from aquatic ecosystems globally every year. With about 1 billion more mouths to feed worldwide by 2025, global agriculture alone will require another 1,000 cubic km (1 trillion cubic meters) of water per year – equal to the annual flow of 20 Niles or 100 Colorado Rivers.

It is expected that water demand in India and China — the world’s two most populous countries – will exceed supplies in less than 20 years.

Water security is key to peace between the Palestinians and Israelis, and between Israel and its regional neighbours, the report adds.

It also notes that in 1950, there were 500 large dams on the planet; today, there are over 45,000. This translates to a staggering average of two large dams added daily worldwide since the Korean War.

Meanwhile, greater competition between the energy sector and other water users for already limited freshwater resources in many world regions will impact future energy development, with significant potential impacts on energy reliability and security.

The report calls on Governments and international institutions to:

“At the same time, water security is also the foundation for food and energy security and for overall long-term social and economic development. It underpins health, nutrition, equity, gender equality, well-being and economic progress, especially in developing countries but increasingly in some of the world’s most developed countries.”

“Today, a child dies on average every 20 seconds from a water-related disease,” says Zafar Adeel, Director of the United Nations University’s Canadian-based Institute for Water, Environment and Health.

“That’s a largely invisible average toll of 4,500 children dying every single day. How ironic that the world this year would commemorate the centenary of 1,502 deaths aboard RMS Titanic with movies and elaborate memorial services. Yet, every single day this year, three times as many kids die because of water problems and, for most people, it’s simply business as usual — appallingly, the world takes little notice.”

“Diseases due to a lack of water and sanitation claim more lives than guns in any war.”

In his paper “A Human Development Approach to Water Security,” Dr. Adeel says that providing safe drinking water and adequate sanitation can form the basis for reducing poverty by improving livelihoods, creating jobs for local communities in developing countries, removing the cycle of disease that reduces productivity, and redirecting the resulting health savings to other needs.

He adds that the main challenge facing the agricultural sector “is not so much growing 70% more food in 40 years, but making 70% more food available on the plate. Reducing losses in storage and along the value chain may go a long way towards offsetting the need for more production.”

Although projections vary considerably, the UN Food and Agriculture Organization estimates an 11% increase in irrigation water consumption from 2008 to 2050, he notes. This is expected to result in a roughly 5% increase of water withdrawals for irrigation. “Although this seems a modest increase, much of it will occur in regions already suffering from water scarcity,” he says

“Water security requires long-term political ownership and commitment, recognition of water’s key role in development and human security, and budget allocations appropriate to the fundamental importance of water to every living thing.”

In a paper entitled “Will the next Wars be Fought over Water?” Sandford says prolonged droughts and serious flooding are likely to cause new kinds of conflict as the effects of climate change join an already long list of water pressures, including overpopulation, contamination, groundwater depletion and soil loss.

“Many still think the effects of climate change will be local, minor and cumulative,” says Mr. Sandford. “In fact, it will not be long before climate change affects everyone, everywhere, simultaneously, compounding every regional economic, social and political disparity. As this happens, it can be expected that the potential for general tensions and conflict over water will rise.”

“If current use trends continue through mid-century when Earth’s human population is expected to reach 9 billion — and assuming climatic and precipitation patterns will remain the same as today’s — our estimated agricultural, industrial and municipal uses would require almost all of the current surface flows in all parts of the planet that we now occupy.”

However, a number of factors may alter this formula, Mr. Sandford says, either for better or for worse: conservation and water re-use may have a huge positive impact on reducing our needs; warmer global temperatures, on the other hand, will put more water into the atmosphere (approximately 7% more water for every 1 degree Celsius increase) and may lead to persistent flooding in some areas or severe drought in others.

“In other words,” he says, “if past trends in terms of supply and human usage persist, we may at some point be close to needing most of the water available to us, which will have a huge impact on the natural systems we need to provide and purify that water. That said, the global hydrological cycle is on the move and new patterns may emerge which may be difficult to predict.”

According to Mr. Sandford, “managing our water resources more effectively and efficiently will allow us to respond to the many surprises we can expect with a warming world.”

“In fact, revenues of the world’s water-related businesses are forecasted to rise from US $522 billion in 2007 to nearly $1 trillion by 2020. The challenge to meet rising water demands presents myriad challenges in many key areas including: upgrading current water infrastructure and rethinking the infrastructure of the future; maximizing the water efficiency of industrial processes; treating wastewater as a resource; enhancing water productivity in agriculture; and using information technology for more effective water management.””