Natural Gas: A Step In The Right Direction 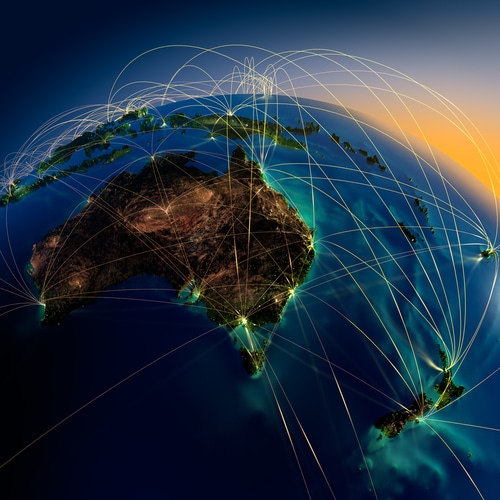 This post by Grady Winston addresses critical energy fuel and energy issues we all need to think about as a population that’s addicted to fossil fuels. I have no doubt some renewable enthusiasts will challenge Winston’s argument for using natural gas as opposed to oil or coal, saying it’s not nearly enough and it’s still a fossil fuel. But its cleaner combustion can’t be — and shouldn’t be — overlooked, especially as we see increasing evidence on the damaging effects of global warming, caused in part,  from greenhouse gas emissions.

It’s no secret that the United States imports a lot of its energy. But the news that the U.S. is on the verge of closing a deal with Australia to buy $30 billion worth of natural gas may strike many people as odd. Nonetheless the move is a smart one ecologically speaking.

For many environmentalists, that statement may sound like nonsense. After all, natural gas is a carbon-based energy source. Like its dirty cousin petroleum, it was formed from fossilized plants and animals. Also like oil it emits greenhouse gasses, including nitrogen oxide and carbon dioxide. So one might ask why it should be used at all.

That’s a fair question. And the answer lies in some basic science. Ask a scientist with a chemistry degree about the degrees of energy expended for all forms of extraction and the relative benefits of natural gas become clearer. While it’s far from a perfect fuel, natural gas is superior to oil for operating generators, automobiles, and home heating and cooking appliances. To understand why, it helps to consider an analogy.

Cigarettes are known to cause serious health issues in an individual; however people smoke cigarettes every day because their bodies have become addicted to the nicotine it provides. It’s incredibly hard to quit cold turkey, but it is much safer to gradually remove the need to smoke over time by cutting back.

Breaking away from something that one is highly dependent on can be nearly impossible. But having a less-toxic version of the substance can help the odds of achieving success.

As of right now, American society couldn’t function without fuels that create greenhouse gasses. This is an undisputable fact. Wind, solar, geothermal, and other totally green sources could only replace about 30% of the energy derived from petroleum, due to current technological limitations. For example, most solar panels currently in use are between 10 – 15% efficient. While this is expected to change in the coming years, for the next few decades the world will continue to use fossil fuels. And trying to persuade the voting public to do without them is politically and socially untenable.

Natural gas can power automobiles, heat homes, and generate electricity, the three purposes for which the vast majority of coal and oil are currently used. Like petroleum, it’s derived from wells and sent to processing plants, where impurities like helium, hydrogen sulfide, and carbon dioxide are removed. It’s then sent to generating plants and storage facilities.

Here’s where the environmental payoff comes in: natural gas contains far fewer carbon atoms than do oil or coal. In addition, its nitrogen and sulfur contents are much lower. Burning natural gas emits no ash into the air like coal does. It creates less carbon monoxide, carbon dioxide, and other hydrocarbons.

Specifically, natural gas releases 117,000 pounds of fossil fuel pollutants into the atmosphere per billion BTUs of energy created, as opposed to 164,000 for oil and 208,000 for coal. Like nicotine gum, it provides the desired effect without as many negative features.

There are several ways to create electric power with natural gas. One technique ignites the gas inside of a boiler. This creates steam which is used to drive a turbine generator. An alternate method burns the gas directly inside of the turbine itself.

Another, more efficient method burns the natural gas within a combustion turbine. The exhaust which is produced creates steam, which in turn propels a turbine. This is known to chemists and engineers as “combined cycle” power generation. It’s rapidly becoming the preferred method of creating electricity for through-the-grid transmission.

It might come as a surprise, but China is the world’s leader in using natural gas for transportation. Drivers there have a choice of filling up either with it or with regular gasoline, and economic incentives ensure that the cleaner option is nearly always the one chosen.

In the United States, the largest users of natural gas-powered vehicles are municipal bus fleets. Private firms such as UPS are using it in their urban delivery zones, and over the road trucking companies are in the initial stages of using 18-wheelers driven by natural gas. The advantages are economic as well as environmental. Natural gas can drive a vehicle as far as a gallon of gasoline will, yet costs 40% less. This is a significant benefit for consumers and businesses alike.

Over 60 million American homes currently use natural gas for heating and cooking, but many more could benefit from transitioning to it. This is especially true in the northeast, where many homes still rely on oil. This will change as the infrastructure needed to transport gas continues to grow nationwide.

Not a perfect fuel, but a step in the right direction

Of course natural gas isn’t a permanent answer to the world’s energy needs. But it can serve as a substitute for petroleum until solar, wind, geothermal, battery, and other technologies can be perfected. When that day will come largely depends on how many individuals are willing to devote themselves to working in the energy field and finding a purely sustainable energy solution. Until then, natural gas will have to do.

About the Author: Grady Winston is an avid writer and Internet entrepreneur from Indianapolis. He has worked in the fields of technology, business, marketing and advertising, implementing multiple creative projects and solutions for a range of clients.