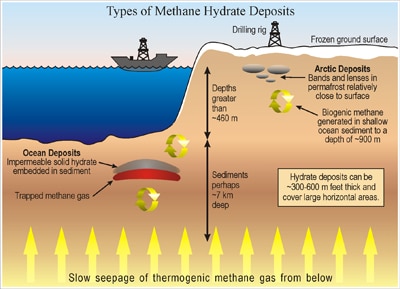 If record-setting temperatures, drought, and food shortages aren’t enough in troubling news, we hope this German research effort to find if methane hydrates deep in the ocean is melting due to rising water temperatures – potentially emitting massive quantities of methane into the atmosphere – returns with negative findings and reports that deep sea ice formations have remained stable.  This press release came in today:

The average temperatures of the atmosphere are rising; the average temperatures of the oceans, too. Not only living organisms react sensitively to these changes. The transitional zones between shallow shelf seas and the deep sea at continental slopes store a huge amount of methane hydrates in the seabed. These specific, ice-like compounds only form at low temperatures and under high pressure. When the water temperature directly above the seabed rises, some of the methane hydrates could dissolve and release the previously bound methane.

“This scenario incorporates two fears: Firstly that enormous amounts of this very powerful greenhouse gas will be released into the atmosphere, and secondly that the continental slopes may become unstable” explains the geophysicist Professor Christian Berndt from GEOMAR | Helmholtz Centre for Ocean Research Kiel. He is leading an expedition starting today on the German research vessel MARIA S. MERIAN which will analyze the sea off the western shore of Spitsbergen in order to find out whether the first methane hydrates in the sea bed are dissolving and what the consequences might be.

The expedition builds on research conducted by marine scientists from Kiel who worked in this area of the sea in 2008. Back then they found over 250 places where gas was escaping the sea bed. “These spots lie directly on the border of the area of stable hydrates” explains Professor Berndt. “Therefore we presume that the hydrates are dissolving from the rim inwards.”

During the upcoming expedition, the scientists from Kiel will be working together with colleagues from Bremen, Switzerland, Great Britain and Norway to discover whether the gas emanation shows signs of dissolved hydrates and whether this is due to warmer seabeds.

With the help of echo sounders, researchers will seek out new gas sources in order to determine the total amount of escaping gas. With Germany’s only submersible JAGO, they will closely investigate the gas outlets in up to 400 meters depth. “It is interesting for us, for example, to find out whether special microorganisms that can break down the methane before it is released in the atmosphere have settled around the outlets” explains Professor Tina Treude from GEOMAR, who will be running the microbiological work during the expedition.

Parallel to this, geophysicists, lead by Professor Sebastian Krastel from GEOMAR, will investigate the slopes under the gas outlet spots for signs of instability using acoustic and seismic methods. “The methane hydrates act like binding cement on these slopes. If they dissolve, chances are that parts of the slopes will slide”, explains Professor Krastel, who focuses on marine hazards at GEOMAR.

“Overall the program on this trip is very extensive. Now let us hope that the weather will play along so that we can conduct all planned tests”, says the head of the expedition Christian Berndt shortly before the departure to Iceland.

The expedition at a glance: