On August 6, 2012 an article was published by the National Academy of Sciences discussing a new report from the National Research Council regarding the approach for identifying and destroying buried chemical warfare materials (CWM). The current processes are not entirely reliable and currently the capability to efficiently tackle large-scale projects does not exist.

The report examines important regulatory issues that ultimately affect the need, timing, and costs of remediating these sites. Federal and state environmental remediation policies address whether buried CWM must be excavated and destroyed or contained in place.

The report encourages the Office of the Secretary of Defense and the Army to both create a new single office to manage and the fund the recovered chemical warfare materials (RCWM) project. The new position and leader must be developed and held accountable that the materials are safely and quickly identified and destroyed.

Currently, authority and funding for RCWM activities depend on how and where the materiel is discovered, and could fall under multiple offices of either the secretary of defense or the Army Secretariat. The Army mission for RCWM remediation is turning into a much larger program that will rival those for conventional munition and hazardous substance cleanup, the report says, and is expected to cost billions of dollars over several years. A clear organizational structure and long-term funding are needed. 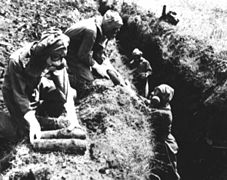 The report discusses how the past methods of removing chemical warfare materials were handled. They mostly consisted of open-pit burning and burial. New remediation of the buried materials and environmental cleanup of the sites is necessary. This poses challenges to the nation and to the Department of Defense (DOD).

Currently the Army uses its Explosive Destruction System (EDS) and there are also three other commercially available technologies to destroy chemical warfare used. The EDS engages reliable technology and an active research and development program that is working to improve throughput rate which is the speed at which chemicals can be identified.

The problems that the DOD faces with implementing new practices to ensure the safe removal and cleaning up of chemical warfare sites and materials is that there is a lack of accurate inventory of buried materials and a reliable cost estimate for the RCWM making it very difficult to predict budget requirements and to get a funding plan in place.

The report, as the National Academy of Sciences detailed, uses Redstone Arsenal facility in Alabama as an example and also notes that this is a “matter of urgency” that needs to be addressed immediately.

Redstone Arsenal facility in Alabama — the site with the largest quantity of buried CWM in the U.S., and which has groundwater contamination — is presented as a case study to show how issues raised in the report can be practically applied.

This is a crucial report discussing a task that must be undertaken in the very near future with utmost priority so that a clear inventory of buried chemical warfare is known and identified and then destroyed without harming the environment or any people.