Infrastructure Repairs That Cannot Be Overlooked 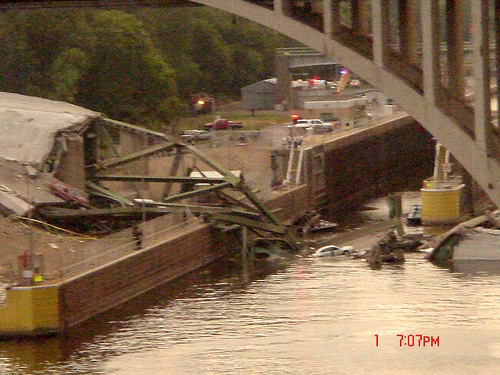 Barry Le Patner’s book, “Too Big to Fall: America’s Failing Infrastructure and the Way Forward” and his website, Save Our Bridges addresses $60 billion in bridge repairs that are not just essential to link transportation via a sustainable infrastructure, they will protect human life

Infrastructure demands are often like one of those items that are slotted on a book’s back pages due to its lack of star-power appeal. Then a disaster happens, like the Aug. 1, 2007 collapse of the I-35W Bridge in Minneapolis, killing 13 people with 145 injured.

The demand to know what went wrong and why the problems weren’t corrected is fundamental to Barry Le Patner’s website, Save Our Bridges. Here information is provided by the Federal Highway Administration’s National Bridge inventory listing 7,980 bridges that could collapse at any time – exactly like the I35W bridge did.

Not that funding was not planned to prevent such disasters – some of it just got spent in the wrong places, LePlatner writes. “Since its inception, money collected as part of the federal gas tax has been used to build and repair the nation’s roadways. Unfortunately, not all of the tax revenue collected is utilized for the maintenance and care of our infrastructure. A large percentage of the funds are diverted to new construction projects and congressional earmarks. Too often, the less glamorous job of infrastructure maintenance and repair is neglected.”

Here are two important definitions on the Save Our Bridges website that everybody should understand.

Structurally Deficient: Federal guidelines define a bridge as “structurally deficient” if certain key components―the superstructure, the substructure, or the deck―is rated at 4 out of a possible 10. Deficient bridges require significant maintenance, rehabilitation or replacement. While not inherently unsafe, states must post limits for both speed and the number of vehicles permitted to travel across these bridges. In short, structurally deficient bridges no longer meet the original design standards for which they were designed and therefore, from an engineering standpoint, have already “failed.”

Fracture Critical: A “fracture critical” bridge is defined by the FHWA as a steel member in tension, or with a tension element, whose failure would probably cause a portion of or the entire bridge to collapse. Fracture critical bridges, of which there are a total of about 18,000 throughout the U.S., lack redundancy, which means that in the event of a steel member’s failure there is no path for the transfer of the weight being supported by that member to hold up the bridge. Therefore, failure occurs quickly, as reflected in the video that captured the collapse of the I-35W Bridge in Minnesota.

There is some positive news to this story. Save Our Bridges writes that other dangerous bridges have been identified and closed since the Minneapolis bridge tragedy. “As recently as September 8, 2011, inspectors closed the I-64 Sherman Minton Bridge carrying six lanes of traffic across the Ohio River between Louisville, Kentucky, and New Albany, Indiana.

In addition, the website provides a comprehensive map of all designated suspect bridges, allowing voters to contact member of Congress seeking remediation.

As terrifying as this news is involving the management of such an overwhelming  issue in the direst of economies, pens LePlatner, there is some flickering of light, depending on one’s perspective:

“Repairing the top 2,000 bridges will cost $60 billion and employ 1.2 million construction workers. During the recent recession, the construction industry was one of the hardest hit sectors. Putting unemployed workers back to work will help stimulate the economy. Further ensuring that all of the fuel tax revenue is used for its intended purpose, and raising awareness among the public are crucial to solving our infrastructure problems.

“The difficult truth revealed by the Save Our Bridges Map is that the nation’s leaders can’t wait any longer to provide the needed funding to make our bridges safe. They must act now.”

Source: Save Our Bridges, Barry B. LePatner, Al Lewis The Wall Street Journal


« Mapping the Future of Climate Change in Africa