Mapping the Future of Climate Change in Africa

Our planet’s changing climate is devastating communities in Africa through droughts, floods and myriad other disasters. 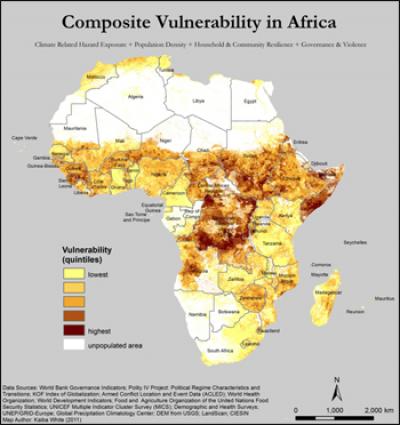 Using detailed regional climate models and geographic information systems, researchers with the Climate Change and African Political Stability (CCAPS) program developed an online mapping tool that analyzes how climate and other forces interact to threaten the security of African communities.

The program was piloted by the Robert S. Strauss Center for International Security and Law at The University of Texas at Austin in 2009 after receiving a $7.6 million five-year grant from the Minerva Initiative with the Department of Defense, according to Francis J. Gavin, professor of international affairs and director of the Strauss Center.

“The first goal was to look at whether we could more effectively identify what were the causes and locations of vulnerability in Africa, not just climate, but other kinds of vulnerability,” Gavin said.

CCAPS comprises nine research teams focusing on various aspects of climate change, their relationship to different types of conflict, the government structures that exist to mitigate them, and the effectiveness of international aid in intervening. Although most CCAPS researchers are based at The University of Texas at Austin, the Strauss Center also works closely with Trinity College Dublin, the College of William and Mary, and the University of North Texas.

“In the beginning these all began as related, but not intimately connected, topics” Gavin said, “and one of the really impressive things about the project is how all these different streams have come together.”

Africa is particularly vulnerable to the effects of climate change due to its reliance on rain-fed agriculture and the inability of many of its governments to help communities in times of need.

The region is of increasing importance for U.S. national security, according to Gavin, because of the growth of its population, economic strength and resource importance, and also due to concerns about non-state actors, weakening governments and humanitarian disasters.

Climate security vulnerability in Somalia is greatest in and around the capital of Mogadishu and the far north. Insecurity in these areas is driven by all four dimensions of vulnerability, but particularly by low resilience and poor governance. Credit: Joshua Busby et al.

Although these issues are too complex to yield a direct causal link between climate change and security concerns, he said, understanding the levels of vulnerability that exist is crucial in comprehending the full effect of this changing paradigm.

The vulnerability mapping program within CCAPS is led by Joshua Busby, assistant professor at the Lyndon B. Johnson School of Public Affairs.

To determine the vulnerability of a given location-based on changing climate conditions, Busby and his team looked at four different sources: 1) the degree of physical exposure to climate hazards, 2) population size, 3) household or community resilience, and 4) the quality of governance or presence of political violence.

The first source records the different types of climate hazards which could occur in the area, including droughts, floods, wildfires, storms and coastal inundation. However, their presence alone is not enough to qualify a region as vulnerable.

The second source—population size—determines the number of people who will be impacted by these climate hazards. More people create more demand for resources, potentially making the entire population more vulnerable.

The third source looks at how resilient a community is to adverse effects, analyzing the quality of their education and health, as well as whether they have easy access to food, water and health care.

“If exposure is really bad, it may exceed the capacity of local communities to protect themselves,” Busby said, “and then it comes down to whether or not the governments are going to be willing or able to help them.”

The final source accounts for the effectiveness of a given government, the amount of accountability present, how integrated it is with the international community, how politically stable it is, and whether there is any political violence present.

Busby and his team combined the four sources of vulnerability and gave them each equal weight, adding them together to form a composite map. Their scores were then divided into a ranking of five equal parts, or quintiles, going from the 20 percent of regions with the lowest vulnerability to the 20 percent with the highest.

The researchers gathered information for the tool from a variety of sources, including historic models of physical exposure from the United Nations Environment Programme (UNEP), population estimates from LandScan, as well as household surveys and governance assessments from the World Bank’s World Development and Worldwide Governance Indicators.

This data reflects past and present vulnerability, but to understand which places in Africa would be most vulnerable to future climate change, Busby and his team relied on the regional climate model simulations designed by Edward Vizy and Kerry Cook, both members of the CCAPS team from the Jackson School of Geosciences.

Vizy and Cook ran three, 20-year nested simulations of the African continent’s climate at the regional scales of 90 and 30 kilometers, using a derivation of the Weather Research and Forecasting Model of the National Center for Atmospheric Research. One was a control simulation representative of the years 1989-2008, and the others represented the climate as it may exist in 2041-2060 and 2081-2100.