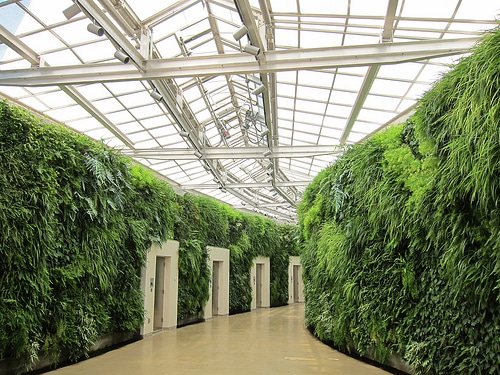 Scientists at the Universities of Birmingham and Lancaster (UK) argue that by ‘greening up’ our streets a massive 30 percent reduction in pollution could be achieved, according to research published today (18 July 2012) in the journal Environmental Science and Technology.

Trees, bushes and other greenery growing in the concrete-and-glass ‘urban canyons’ of cities would deliver cleaner air at the roadside where most of us are exposed to the highest pollution levels, and could be implemented street-by-street without the need for large-scale and expensive initiatives.

Plants in cities clean the air by removing nitrogen dioxide and microscopic particulate matter, both of which are harmful to human health. These pollutants are significant problems in cities in developed and developing countries: UK Government Environmental Audit Committee estimates are that outdoor air pollution causes 35,000-50,000 premature deaths per year in the UK, while the World Health Organization’s outdoor air quality database puts the figure at more than 1 million worldwide.

The researchers have found that, because pollution cannot easily escape street canyons, ‘green walls’ of grass, climbing ivy and other plants have a better opportunity than previously thought to act as an air pollution filter.  Instead of reducing pollution by 1 or 2%, reductions of more than ten times this magnitude could be achieved, according to this study.

Using a computer model that captures the trapping of air in street canyons, as well as the hundreds of chemical reactions that can affect pollution concentrations, the research team could distinguish the effects of plants in canyons from those of plants in parks or on roofs.  Green walls emerged as clear winners in terms of pollutant removal. Street trees were also effective, but only in less polluted streets where the tree crowns did not cause pollution to be trapped at ground level.  The researchers even suggest building plant-covered “green billboards” in these urban canyons to increase the amount of foliage.

For the first time, the study predicts that a significant effect on pollution could be achieved on a street-by-street basis.  Professor Rob MacKenzie, from the University of Birmingham’s School of Geography, Earth and Environmental Sciences, said: “Up until now, every initiative around reducing pollution has taken a top-down approach – scrapping old cars, adding catalytic converters to cars, and bringing in the congestion charge – some of which have not had the desired effect.

“The benefit of green walls is that they clean up the air coming into and staying in the street canyon – planting more of these in a strategic way, could be a relatively easy way to take control of our local pollution problems.”

All of this requires, of course, that the plants don’t expire in the extreme environment of today’s cities. Dr Tom Pugh, from Lancaster University, UK, said: “More care needs to be taken as to how and where we plant vegetation in our towns and cities, so that it does not suffer from drought, become heat stressed,  vandalised, or interact negatively with other aspects of our urban areas, and can carry out the very important job of filtering our air.”

Nicola Cheetham, Head of Environment (Surface Transport), Transport for London, said: “I am pleased that this research adds to our knowledge of the benefits of green infrastructure and the optimum locations for placing green walls in transport corridors. The publication of the results coincides with the completion of TfL’s second green wall at The Mermaid, Blackfriars, installed as part of the Clean Air Fund programme. Our own research, conducted by Imperial College London, shows the ability of different plants to trap particulate matter. The bringing together of these various strands of research will help to  inform the planners, designers and green infrastructure professionals who are responsible for the provision and management of green infrastructure in our towns and cities.”