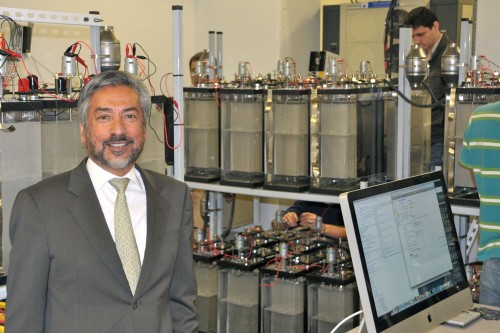 In today’s economy, businesses and individuals alike are trying to reduce their costs. Although many small businesses are definitely not changing their prices, buildings’ electric bills may suddenly be on the downslope thanks to new technology.

According to The Green Optimistic, the CUNY Energy Institute recently announced that it has built an operating prototype zinc anode battery system. In the past, the CUNY Energy Institute has specialized in providing low cost, safe, non-toxic batteries that offer not only fast discharge rates but high energy densities as well. This new announcement however brings innovation to a whole new level.

Benefits are plentiful when it comes to the revolutionary zinc anode battery. Zinc anode batteries offer an environmentally friendlier option. Furthermore, these batteries are also significantly less expensive than their nickel cadmium counterparts. Eventually, they could even replace the lead-acid batteries at the lower cost end of the market.

There is however one major challenge. Essentially, the dendrite formation associated with zinc should needs to be addressed. Dendrites are crystalline structures that cause batteries to short. CUNY researchers are actively handling this issue. They have developed a flow-assisted zinc anode battery with a sophisticated advanced battery management system (BMS) that actually controls the charge/discharge protocol.

The CUNY Institute has assembled a 36 kilowatt-hour rechargeable battery system in order to best demonstrate this cutting-edge technology. The system, located in the basement of Steinman Hall on the City College of New York campus home, is made up of 36 individual one kWh nickel-zinc flow-assisted cells attached together and operated solely by the BMS.

During low usage periods such as overnight, these batteries charge. On the contrary they discharge during peak-demand periods when surcharges for power usage are very high.

“This is affordable, rechargeable electricity storage made from cheap, non-toxic materials that are inherently safe,” said Dr. Sanjoy Banerjee, director of the CUNY Energy Institute and distinguished professor of engineering in CCNY’s Grove School of Engineering. “The entire Energy Institute has worked on these batteries — stacking electrodes, mounting terminals, connecting to the inverters — and they are going to be a game changer for the electric grid.”

These incredible batteries are created for more than 5,000-10,000 charge cycles. That equals a lifespan of over ten years! Thus far, the demonstration system has been so successful that plans are underway for expanding it to 100 kWh and later an additional 200 kWh yet this year. Once the expansion is complete, this demonstration model will hold the power of more than 30% of Steinman Hall’s peak demand power needs. Thereby yielding a whopping savings of over $6,000 per month.

At this point, researchers are currently working towards having an operational company by fall 2012 in order to commercialize these valuable batteries. Dr. Banerjee is hopeful for a thriving future for the zinc anode batteries potentially involving industrial facilities, commercial properties, backup power for server farms and even grid support.

This story is a shining example of how new innovations in existing technology can lead to major advancements in energy efficiency.  As the Thomas Edison quote goes “Many of life’s failures are men who did not realize how close they were to success when they gave up.”