Software Advice analyst, Ashley Halligan, contacted me the other day about an article she recently published concerning four urban sustainability initiatives that are lesser known across the globe.

These featured cities, historically violent, filth-ridden, or swampy locations, might now serve as inspiration to all municipalities worldwide. Any city, quite literally, has the potential to undertake an environmental sustainability makeover, and accomplish that mission in eye-opening fashion.

1) Naples, Italy – Halligan writes: “Naples has been long-buried in toxic garbage–lining alleys, streets, and even surrounding Mount Vesuvius–and often attributed to the Camorra (a Naples-based mafia organization). But activist groups, residents and international organizations are taking major steps to conquer the problem.”

2) Medellin, Colombia – Halligan writes: “Medellin has made incredible advancements in their public transportation options, as well as linked its poorest neighborhood, Comuna 13, to its city center via a 1,300 foot escalator.” 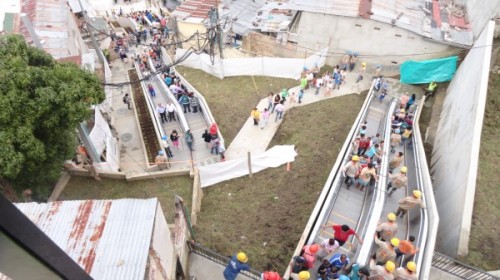 3) Philadelphia, Pennsylvania – Halligan writes: “In Mayor Mike Nutter’s 2008 inaugural speech, he vowed to make Philadelphia “the nation’s greenest city.” Currently in its third year of a six-year plan initiated in 2009, Philadelphia is well on its way to achieving many of its initial 14 target goals.”

Literally a brand spankin’ new city, Songdo is an aerotropolis built atop South Korean swampland 40 miles from Seoul and seven miles from Incheon International airport. As part of President Lee Myung-bak’s 38-billion dollar stimulus package encouraging green and low-carbon growth, Songdo is the first city in the world to have all of its facilities meet or exceed Leadership in Energy and Environmental Design (LEED) requirements.”

Each city in the piece has a distinctly different approach to their sustainability initiatives, and some of the realities encompassing the cities are quite inspirational. (Medellin, for example, has seen a 90-percent decrease in crime throughout its makeover period. Songdo on the other hand–a state-of-the-art city built from scratch in South Korea swampland–happens to be the country’s first LEED Neighborhood.)

Thanks for the report, Ashley.


« GUEST POST: Clever Glass – The Science Behind The Savings