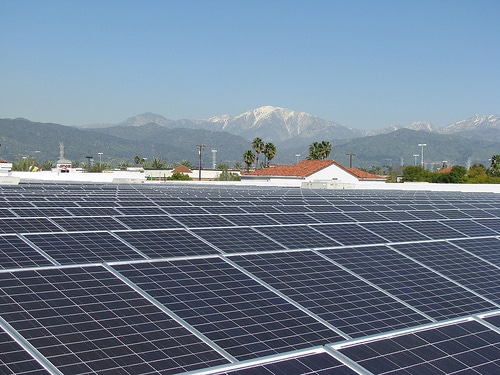 When we think of solar power, most of the time we think of small-scale, decentralized energy production such as rooftop solar panels on homes and businesses, with power generated at home for everything from lighting the home to opening the garage door. This is certainly justified, given the dispersed nature of solar energy and the consequent potential for do-it-yourself solar power generation.

There is no doubt that the future of solar power will include a lot of this sort of small-scale, liberating, bootstrap power generation. Nevertheless, solar does have an application in larger-scale projects as well, and can be used on a commercial scale to replace conventional power production by fossil fuel burning, nuclear power, and other forms of electricity production that cause environmental issues.

California utilities, responding to a state requirement that twenty percent of the energy produced in the state come from renewable sources by 2010 and 33 percent by the year 2020, have requested rights-of-way from the state Bureau of Land management to build 34 big solar-thermal power plants on over 300,000 acres of BLM land, with a combined power generation capacity estimated at over 24,000 megawatts.

The land in question is largely in the California deserts, which is of course the best site in the state for solar power generation, as the weather is seldom a problem and the land is generally not in use for other purposes.

Solar thermal energy is the production of power from sunlight that is focused by mirrors, using the heat to generate electricity through various conversion methods. This is distinct from photoelectric panels, which are the predominant method by which solar power is generated for home use. Solar thermal methods have been the prevalent choice for generating electricity on a large scale. However, it is possible that these California projects will turn out to be dinosaurs in the end.

In the past, the high cost of solar panels has rendered solar thermal more cost-effective for large-scale energy production, while the greater versatility and convenience of the panels, as well as their more compact design, has made them the technology of choice for rooftop production. Advances in solar-panel technology over the past decade or so has caused the price to drop dramatically, however.

This is good news for solar power in general, but it may mean that the commitment of California utilities to construct a bunch of big solar thermal plants to help meet the state’s future power demands could be economically short-sighted. It could also mean that consumers in California looking to build photography websites, run their coffee maker, or do anything else that requires electricity will be paying more than it could have if it were produced the the other solar technology.