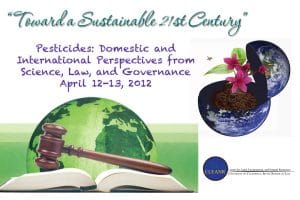 An on-going series of conferences that is dedicated toward improving the environment and making more sustainable choices easier is the Toward a Sustainable 21st Century series, co-sponsored by multiple companies all pooling their resources to make a difference.

The companies that are in collaboration are the University of California, Irvine (UC Irvine), the Newkirk Center for Science and Society, the Program in Public Health and the School of Social Ecology. They have founded this series because they believe that together they can make a bigger sustainable impact than as individual sources.

Each conference is part of four general categories in 21st sustainability; Science, Law, Governance and Special Topics. Thus far they have sponsored events such as:

Last week, April 12-13, they held the latest conference entitled, “Pesticides: Domestic and International Perspectives from Science, Law and Governance.” It was co-sponsored by the UCI Law Center for Land, Environment and Natural Resources and held in Irvine, CA. This conference was dedicated to controversial issues that surround pesticide regulations and use. It was open to the public and was 10th in the series with only one more currently planned for May 3 called Communicating Science Workshops.

The series is based on,

“Significant unsolved problems of global society in the areas of marine resources conservation, and threats to ecosystem and environmental health caused by toxic chemicals and the absence of effective governance structures which promote sustainability.”

Toward a Sustainable 21st Century is a series designed to be an eye-opener for the public in regards to the many varying topics that pose a threat to a sustainable life or to ecosystems that are currently being damaged, threatened and even permanently destroyed. This is a wake-up call, the next step is up to the individuals that are going to the seminars and conferences to actually make a difference in a more sustainable environment as is being promoted by the series.