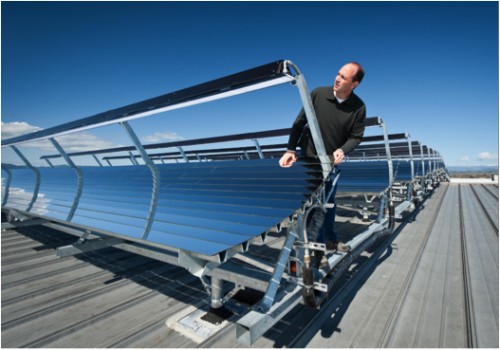 “Our founder Jess Jackson was a trailblazer who made sustainability a core part of Kendall- Jackson’s DNA, largely through innovation,” said Kendall-Jackson’s vice president of sustainability Robert Boller. “We’re thrilled to take this leadership position with Cogenra by installing the largest rooftop solar electricity and hot water rooftop system to date and two upcoming installations at our other production sites. It’s a win for the environment and our bottom line.”

Cogenra partnered with local installer SunWater Solar to construct the array. The solar cogeneration system provides up to 60 percent of the building’s hot water needs, with the electricity powering lighting and cooling. In addition to this initial solar cogeneration project, Kendall-Jackson will install Cogenra arrays at its Vinwood estate in Sonoma County and an additional winery in Monterey County.

Gilad Almogy, CEO of Cogenra Solar, said, “Solar cogeneration is quickly becoming one of the industry’s most effective tools to maximize the impact of solar energy production to meet both electricity and hot water needs. We commend Kendall-Jackson for their sustainability leadership and look forward to deploying future projects.”

“This partnership between two great California companies is proof that business can boost the bottom line while helping the environment,” said U.S. Congressman Mike Thompson.


« GUEST POST: The Importance Of Making Your Home Asbestos-Free