Direct Methanol Fuel Cells Are a Proven Alternative to Batteries

I have recently written a number of items concerning the alternative fuel methanol as I believe it holds great promise on the energy front because it’s not only renewable, the energy it provides is clean. This post appeared today on Clean Technica. 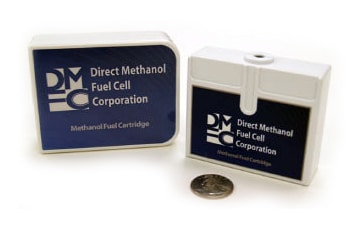 For those interested in alternative fuels that are renewable, Direct Methanol Fuel Cells (DMFCs) are worth investigation. These alternative energy devices – invented at the Caltech/NASA Jet Propulsion Laboratory with the University of Southern California (USC) – can be used to power a wide range of portable and mobile electronics.

Here is the green beauty of these electrochemical devices: They are capable of converting high energy density fuel (liquid methanol) directly to electricity, reports Direct Methanol Fuel Cell Corporation, a subsidiary of Viaspace, which develops disposable methanol fuel cartridges that provide the energy source for fuel cell powered notebook computers, mobile phones, military equipment and other applications being developed by electronics OEMs, such as Samsung and Toshiba.

They operate silently, at relatively low temperatures and offer much longer operating time than today’s batteries. Better than a battery, DMFCs don’t need to be recharged. They can provide electricity continuously to the consumer electronic devices as long as oxygen and fuel are supplied to the fuel cell. To achieve this, DMFCs can be “hot-swapped” and instantly recharged with replacement methanol cartridges (akin to batteries).

Methanol or a methanol/water solution is the industry’s choice of fuel. Because it is a liquid, it is easy to store and transport. Methanol is inexpensive and readily available.

Viaspace provides this detail on how the fuels cell works:

How does a DMFC Work?

The heart of a fuel cell consists of catalysts for the electrochemical reaction and a special piece of plastic that can conduct protons. The technical term for this special plastic is polymer electrolyte membrane (PEM) and the most common PEM used in DMFCs today is NafionTM, produced by Dupont. The most common catalysts used are PtRu alloy for the anode and Pt for the cathode.

In the fuel cell, the fuel is not burned, but rather is converted into electricity through an electrochemical process that splits methanol into protons, electrons, and carbon dioxide at the anode and then combines these protons and electrons with oxygen at the cathode to produce water. It is a very simple concept.

As I have reported before, methanol is an alternative renewable fuel that should be embraced with open arms – from both a cost and climate standpoint.