Methanol Fuel Being Tested in China

This story about the launch of testing for the alternative fuel methanol comes from China Daily. 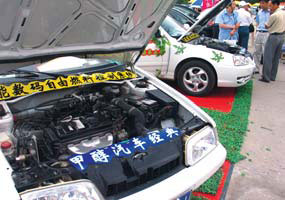 Car with an engine that can burn methanol at an auto show last year. Wu Changqing / for China Daily

BEIJING – In a move to boost the use of alternative energy, China began trials on methanol fuel in three locales this month, said the Ministry of Industry and Information Technology.

The test program will be held in Shanxi and Shaanxi provinces, and the metropolis of Shanghai, over the next two to three years.

The fuel will be up to 85 percent methanol and the rest gasoline, said MIIT.

Usually produced from wood, methanol is now widely used in racing cars in the US. It can also be made from coal.

One of the test regions, Shanxi province in North China, has rich coal reserves and will as a result have more 40 methanol fueling stations, but the three test areas have experience in developing methanol-related technologies.

Officials in Shanghai announced that trials in the metropolis would likely begin with taxis and gradually be introduced into car manufacturing, China Securities Journal reported.

One of the first local automakers to make an engine that can burn methanol is Zhejiangprovince’s Geely Motors, which also makes some of the lowest-priced cars in the world.

China began research into methanol-fueled cars in the 1980s, but development accelerated in 2009 when MIIT boosted research in response to the boom in auto sales, rising crude oil demand and the need for more ecological economic growth.

Zhang Guoyou, an engineer at Shanghai Coking and Chemical Corp, told reporters that methanol made from coal can reduce carbon dioxide emissions up to 70 percent.

Q & A: Can You Generate and Sell Electricity to Electric Utilities? »