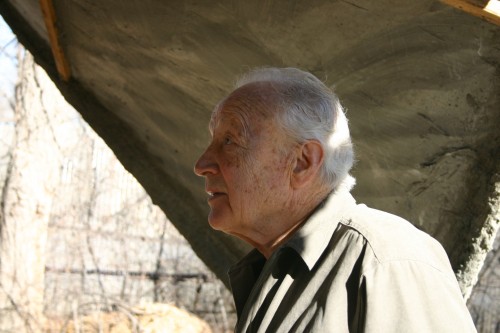 George Nez stands under a Hypar Roof in Denver

Walking a backyard in northwest Denver, visitors will encounter an unorthodox-looking roof that has been coated and strengthened using thin-shell concrete. The roof takes on the sculptural shape of a hyperbolic paraboloid. Called a hypar roof, this beautiful form is the creation of George Nez, a 91-year old international habitat and resettlement pioneer who long ago (1958) served as the planning director for this city.

Importantly, this roof was erected on upright supports even before the walls were built. “Roofs-First” is a key part of Nez’s emergency resettlement philosophy. This particular roof was constructed on the ground and then lifted in place by African student builders who wanted to build similar structures in locales like Rwanda and Sudan where forced resettlements have been all too common.

Nez hopes structures such as these might help meet the housing needs of displaced people worldwide. He should know. When he left the city of Denver, he worked with the United Nations and the United States Agency for International Development, specializing in resettlement programs. His first location in 1961 was huge – Ghana’s Volta River. He was to participate in the construction of the massive Volta River hydroelectric project. The dam and lake to be formed would generate a good part of Ghana’s electrical needs for future growth. But 100,000 people from 22 villages along the Volta River and its tributaries would be displaced and require new homes in short order.

Nez and his staff had 18 months to construct 14,000 homes – a monumental task. Then came the idea of building skeleton structures covered with finished roofs. The concept of building roofs first sounded like an ideal solution because it provided the citizens of this equatorial climate with immediate shelter from rain and sun, then provided the time for people to finish the walls themselves with whatever indigenous method they might choose.

“We built those towns by putting roofs up first on concrete posts,” Nez remembers. “Some 14,000 roofs were put up rapidly by small crews, then you had these buildings which were merely a whole city of roofs.”  The resettlers could move in there directly on schedule and build their own wall.

Colorado architect Doug Eichelberger recalls his first meeting with Nez, years ago. “He can’t help but to talk about his roofs,” an admiring Eichelberger remembers. Eichelberger has designed a series of structures on his ranch made from baled plastic and paper – low-cost materials that too often get tossed in the landfill. Nez and Eichelberger ultimately collaborated on a demonstration structure at the Denver Sustainability Park, which might provide an example for low-cost emergency shelters.

Nez’s hypar roof was used. The roof was built on the ground, and then placed on Eichelberger’s salvaged wall structure using a small crane where it now shows against the backdrop of downtown Denver’s skyline. The end result is there to be seen by anybody who walks by or looks down from the skycraprs – a low-cost solution that can be used almost anywhere – a testament to a smart plan that commenced over 50 years ago on Ghana’s Volta River.