Riverside Park Gets a Face Lift From Green Design 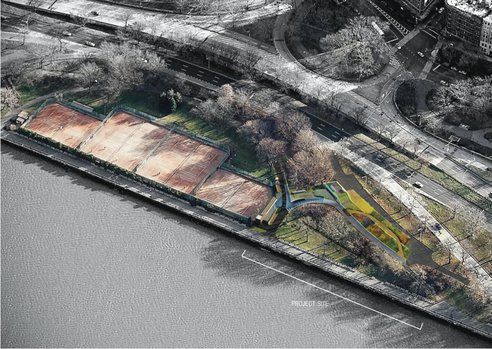 In 1875 Frederick Law Olmstead designed Riverside Park, and then in 1935, a highway ran through it. Despite all the odds, the park survived with the transportation addition. Now there’s a stretch of Riverside Park that sports clay tennis courts and decrepit macadam parking lots and paths that suddenly end, leading to nowhere. The completion of the Hudson Greenway bike and walking path brought an influx of visitors to this five-acre area of Riverside Park near 95th Street. For decades this section of Riverside Park had gone under-utilized except for the clay tennis courts, but as the greenway stretched past it, the increase in visitors revealed that the area was ill-equipped to cope with greater use.
What became glaringly apparent was that the entire section of park would have to be redesigned, a sticky proposition for a historic park and one of New York City’s scenic landmarks.Enter the Riverside Park Fund and Riverside Clay Tennis Association. Together they launched a 5.5 million capital campaign to revamp the park and make it a source of pride for all New Yorkers. At the helm of the redesign is Rick Cook of Cook + Fox, and he is creating a new maintenance building and washrooms according to the Living Building Challenge, one of the toughest sets of green standards.
It’s called The Green Outlook and promises to be an off-grid, self-contained, sustainable complex that will serve the needs of everyone who uses the park, from bicyclists, joggers, tennis players to day trippers.

The first order of business is to remove the abandoned parking lot and replace it with a native wildflower meadow. Solar garden lights would be helpful in this setting. Then outlooks will be built to capture stunning views of the Hudson River. Cook will design public restrooms that employ solar energy, composting toilets and a green roof. He’ll also be responsible for the design of the maintenance facility that will care for the parkland, gardens and tennis courts.
Instead of the usual hookups to sewer and power, The Green Outlook intends to be self-sufficient as much as possible. The toilets may generate more compost than for one meadow to utilize efficiently, but this is a small concern in regards to the overall, green design. According to the LBC standards, there must be zero net water, ensuring that the park relies on rainfall and discharges it on site. The Green Outlook is careful to phrase their plans with intentions and not promises. The truth of this park renovation is that it must satisfy the historic restoration specifications as well as the current users and park administration. But with some innovative green design and cooperation from everyone, Riverside Park may become the green jewel of parks in New York City.