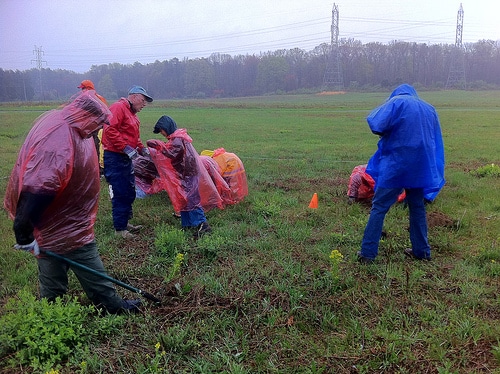 Want to put an organics recycling crew to work invigorating your lot? Try starting with a colony of worms. I came across this comment on the Twitter feed of Earthwormsinfo:

“Starting small, my goal is to get 1000 households recycling with earthworms by the end of 2012. From there on we will think big!!!!!”

For people ready to begin composting activities, this location appears to be one that leads to a lot of places worth visiting. I like this website’s reference to Charles Darwin, who sang the praises for these worms in 1881:

“Of all animals, few have contributed so much to the development of the world, as we know it, as these lowly creatures.”

Going further, it happens earthworms improve the mechanical structure of soil by opening channels through which water, air and roots can travel to more easily assisting plant growth. Earthworms redistribute nutrients throughout the soil when they feed and excrete at different depths adding to soil life and plant health. It has been estimated that nearly every particle of healthy topsoil on earth has passed through earthworms at one stage or another.

Earthworminfo provides this information as well regarding the depths at which earthworms go about their business:

Different species of earthworms burrow at different depths. Their burrow range from the surface to, in some deep soils, over two metres deep. They can cross like highway intersections and can range from 1mm to 10mm wide. Some are vertical and some are horizontal. Some are more or less permanent and others are made as the need arises. There can even be small nesting chambers.

These burrows allow infiltration of surface water and air to lower depths. Earthworm activity can increase soil water holding capacity and availability to plants by up to nearly 40%. So burrows from earthworms should have a significant impact on lowering water tables and reducing salinity processes.

Here’s a quick summary about earthworms: