Service Stations Designed with the Future in Mind

Designing service stations has traditionally taken on roles of designing for the future. They, in general are an optimistic, futuristic, reaching for the stars concept where people, nowadays at least, can go for nearly everything.

But how economical or well designed can they really be?

The Helios House designed by Office dA was the first LEED certified gas station in the United States. Ironically it minimizes its energy consumption by containing water run-off and implements the use of solar panels. 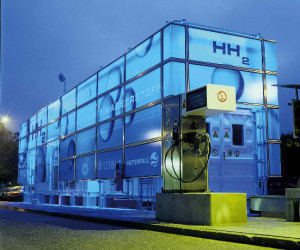 In Germany a new hydrogen station was designed in 2011 by Hydrogenics Corporation. They are pushing to establish a hydrogen infrastructure that will support fuel cell vehicles throughout the country. This is a model version that is capable of producing 130 kilograms of hydrogen per day, will use wind power to operate the production of hydrogen, and this carbon-free energy chain will move the country away from their consumption of oil.

Toyota and Shell have announced that in 2015 they have plans to open a new pipeline-fed hydrogen fuel station in Torrance, Ca. They are approaching the expensive cost of fuel cell vehicles by claiming that their vehicles’ cost will be lowered by as much as 90 percent by using less hydrogen. They are predicting that their first hydrogen powered car will cost 50,000 dollars.

“Toyota believes this to be a major turning point in the effort to establish a hydrogen infrastructure.”

So as the progression of service stations continues, it is a truly inspirational story of what changes in design and technology lie ahead for sustainable resources.