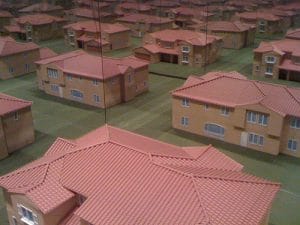 After the real estate market crashed and the recession began, many industry experts projected that construction would turn to more energy efficient and environmentally friendly housing. The essence of green design means more efficient homes that typically need less square footage. From an economic view, smaller would mean more affordable, as well. As new construction moves away from the McMansions of yesterday, they’re not going smaller, they’re going boxier.

Even as prices fall for average-sized new homes in this depressed economy, sales of big-box houses are on the rise. New home builders have discovered a market of buyers who want a lot of square footage because they’re in need of the space. Others want to buy the large boxy design because it’s too good to pass up at such a low price. In states where land sells at fire-sale prices, such as Texas and Florida, builders are constructing big-box houses and selling them for the price of a mid-sized home.

In Orlando, Meritage Homes credits the sale of their big-box houses (houses with 4,000+ square-foot floor plans) with more than half their sales in the Orlando area. Two years ago the company imported a model from its Texas location, and the big-box design has been selling well ever since. Overall, the big-box houses account for at least 30 percent of the company’s total sales, depending on the area.

Other builders are following suit. Lennar recently announced its 4,054-square-foot Himalayan model in the Tampa, Florida, market for $270,990. D.R. Horton followed suit with The Surrey, a 4,600-square-foot home in Lakeland, Florida, starting at $223,990. The list continues as builders try to cash in on the bigger home trend. The competition lies in resale, however, not with other builders.

The big-box home trend arose specifically as a way to compete against resales. It’s hard to find larger homes among foreclosures and resales, so the bigger size becomes the difference in product. A larger home with garage doors also passes appraisal easily because the price per square footage is less and the higher-priced portions of the home, kitchens and bathrooms, are amortized over a larger number of square feet.

Figuring the profits on a big-box home is tricky. In this economy, the profit margin is thin. First, the land has to be inexpensive. The builder must stick to the box-on-top-of-a-box design because it’s cheaper to construct than an average house that has a pitched roof and more intricate styling. Also, material costs are down in this economy and labor is cheap. All of this contributes to a large, boxy house built for cheap, and that’s what matters to banks, appraisers, and the average buyer.

Meritage is taking steps to make themselves greener, but a true change in the market will only be made when consumers stop thinking bigger/cheaper is better and put their money in sustainable, greener housing.

Join in the discussion in the comments below and/or share the piece.

Some rights reserved by dbasulto