Pittsburgh Skyscraper To Be Greenest In The World 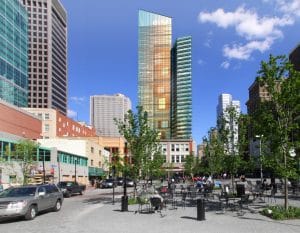 PNC Financial Services Group, Inc. recently announced that it plans to construct the world’s most environmentally friendly skyscraper. Once complete in 2015, the Tower at PNC Plaza will serve as PNC’s executive offices. The approximately 40 story building will be located at the same Pittsburgh intersection where PNC has been headquartered for more than 150 years.

The approximately 800,000 square foot Tower at PNC Plaza will have approximately 300 underground parking spaces, street level retail spaces and green rooftops. Erecting the planned $400 million Tower should create 2,500 construction jobs, with up to 500 workers at a time on the site during peak periods.

The Tower will feature a double glass facade to enhance energy efficiency by reducing cooling costs and allowing natural airflow to the building. Using advanced sensors and metering, a state-of-the-art, high-efficiency heating and cooling system will deliver conditioned air to specific zones of the building, as needed. The building will be oriented to take advantage of sunlight in workspaces, reducing the need for artificial light during the day.

The design team is exploring fuel cells, solar panels, geothermal systems and other alternative power generation sources that will significantly reduce carbon emissions. The building’s green rooftops will collect rainwater and channel it for use in other parts of the structure, as well as reduce the heat gain associated with traditional rooftops.

Deconstruction of existing buildings on the site is expected to begin in late 2011, with construction scheduled to begin in the spring of 2012. PNC anticipates completion of the project in the summer of 2015, and will solicit community input on street level design and other aspects of the building in the upcoming months.

Re-usable materials from deconstructed buildings on the site will be donated to a Pittsburgh-based non-profit building supply warehouse, and a cultural survey of the site, including archeological excavation, will be conducted.

PNC, which has more newly constructed buildings LEED-certified by the USGBC than any company on Earth, will pursue LEED certification for their new headquarters. In 2010, PNC opened Three PNC Plaza on Fifth Avenue in Pittsburgh, which is one of the largest LEED-certified mixed use buildings in the United States.

“PNC is making a strong statement by building their forthcoming headquarters to Leadership in Energy and Environmental Design standards,” said S. Richard Fedrizzi, president, chief executive officer and founding chairman of the United States Green Building Council. “This project is just another example of PNC’s on-going leadership, setting a green building example for other large corporations through their application of LEED.”


« How Green is the iPhone?