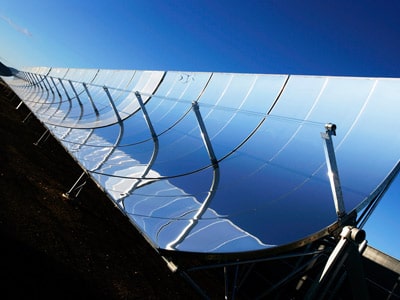 Inventive minds at Wake Forest University are discovering inspired new solar-powered uses including a polymer solar-thermal cell that can capture infrared rays from the sun to generate heating. An energy-efficent technology advance that can decrease energy costs up to 40 percent. Students and researchers at Wake Forest University have developed a device that is the first to generate power from both the Sun’s heat and its visible light according to researchers.

A polymer solar-thermal based cells are not only energy-efficient but aims to be “a system that is ultra-efficient in home heating and cooling” according to David Carroll, Ph.D., Director of Nanotechnology and Molecular Materials at Wake Forest University,  “Our solar-thermal device takes better advantage of the broad range of power delivered from the sun each day.”

Geothermal add-ons for heat pumps on the market today already collect heat from the air or the ground. But this new device relies on a fluid that flows through a roof-mounted module, where it collects the Sun’s while an integrated solar cell generates electricity from the Sun’s visible light. 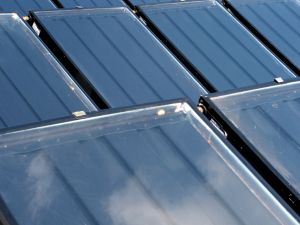 array of clear tubes that are five millimeters in diameter. The tubes lie flat, where a proprietary blend of oil and dye flows through them.

The visible sunlight shines into the clear tube and the oil inside, and is converted to electricity by a spray-on polymer photovoltaic on the back of the tubes. As a result, the oil is superheated, and can then flow into a heat pump to transfer the heat inside a home.

In comparison to flat solar cells, the tube design has an important advantage of capturing light at oblique angles, meaning it can draw power for a longer period of time during the day. Such a device can potentially be integrated into building materials, such as roofing tiles.

A standard rooftop can miss as much as 75 percent of Sun’s energy because it can not capture the longest wavelengths of the light. Also it misses the greatest amount of solar power available during the day because the roof solar panels collect the most light between 10 a.m. to 2 p.m.

The design of the solar-thermal power is to utilize the sun’s heating abilities as well as solar capabilities. Tests thus far have shown 30 percent conversion of solar energy to power whereas standard solar panels convert only up to about eight percent on average.

Wake Forest University researchers believe the Solar-Thermal panels can provide a savings of up to 40 percent on the cost of heating because of the power conversion from the solar panels. In coming months, the Wake Forest research team will produce a 3’ x 3’ square solar thermal cell as it plans to bring its technology closer to the marketplace.