Microsoft is considered one of the most recognizable global brands throughout the world. It is difficult to find a home or office globally without Microsoft products. With the company’s obvious dependence upon electricity, Microsoft is probably not a company that anyone might associate with green and sustainable initiatives.

In 2008, Microsoft hired Rob Bernard, the first ‘chief environmental strategist’ for this global brand. Bernard remains responsible for environmental sustainability and development within one of the world’s largest companies which is not an easy task to take on.

Nevertheless, Bernard seems to have implemented a real change within the company. Today, Microsoft acquires 25 percent of its energy from renewable sources. In addition, Bernard has encouraged a 30 percent reduction in travel and an investment in energy efficient corporate buildings.  Unequivocally proud of these achievements, Bernard says that Microsoft is “50 percent more efficient than we were three years ago. I think we’ll easily get to another 50 percent within another three years.”

In 2009, Microsoft’s most  green initiative was developed by the company, Windows 7- an energy-saving computer system. More recently, Bernard oversaw the launch of an online application which can be used to monitor home energy.

In the future, this application will be developed in conjunction with Ford, to assess the impact of mass recharging of electrical vehicles. Incidentally, Thomas Edison’s invention of the nickle-iron storage batteries were used in the first electric vehicles developed by Ford years ago.

According to Bernard, the IT industry must continue to strive to become more energy-efficient. This is especially important when you consider the rapid growth of this industry. For example, a recent report by the Climate Group reports that by  tye year 2020, PC ownership would quadruple. If the IT industry continues to operate as it is now, this would lead to 1.43bn tons (GtCO2e) per yearwhich would account for three percent of the world’s carbon emissions.

Therefore, it is easy to see how the IT industry could become crucial in the reduction of carbon emissions. The Climate Group’s report states “Specific ICT opportunities can lead to emission reductions five times the size of the sector’s own footprint, or 15 percent of total business as usual emissions by 2020.” 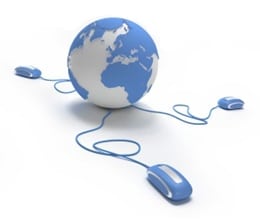 Microsoft continues to lead in its field through technology and has recently commissioned a study on cloud computing which is the use of large data centers that can be accessed from any device anywhere in the world. The study found that the use of cloud computing in large organizations could reduce energy use and emissions by up to 30 percent. In smaller companies, the reduction could be as high as 90 percent. This exemplifies the original pioneer in electricity, Thomas Edison, who quotes, “If  there’s a way to do it better – find it.”

Although, the use of cloud computing is open to speculation, with some believing that it could increase Microsoft’s emissions profile. Nevertheless, Bernard is positive about the changes in store, “We’re focused on how we drive energy efficiency at scale both in IT and through the use of IT.”