Becoming Intimate with the Orientation of the Habitat

Orientation planning for a habitat represents one of the most crucial parts of the overall design, engineering and building process – even more so today when so much consideration is given to green details, like what kind of energy will be used and how to maximize the efficiency of the energy that will be used.

Other important considerations often come into play, such as how will people socialize and interact in the planned structure, where they might store extra belongings to how much access to the outside they will have. There are countless options here – none absolute or perfect. The decision that are made will depend on the taste and lifestyle of who will reside in the planned habitat.

Denver architect Doug Eichelberger believes orientation is “really important” in his design work. Often he will attempt to maximize considerations such as solar gain, but not always. Sometimes, view takes precedence. He recalls a home he recently completed where the view of the mountains was so stunning, it rated first on the design scale.

Southern exposure (at least for those in the northern hemisphere) should be one of the initial considerations. Solar panels, for instance, in order to deliver the most effective energy should be placed on a pitched roof that faces to the south. If the roof is oriented differently, it will be difficult to get the most energy from the solar panels. If the system is passive, this compass point is still important.

Windows also must be considered regarding southern exposure.  South-facing windows will bring in the most light, but they will also be a gateway for the most heat, which has both a good and bad side. If summers are very warm, such windows can turn the inside into an oven. Retail businesses that have south-facing showrooms featuring lots of glass will need to regularly rotate merchandise that sits in the window or risk damaging merchandise due to color-fading and sun wear. 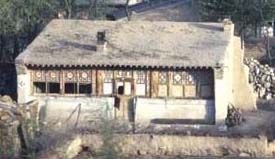 “One of the most striking aspects of Chinese domestic architecture is the practice of making houses face south,” writes Patricia Buckley Ebrey, who has written “A Visual Sourcebook of Chinese Civilization,” a good read that provides considerable history on why many traditional homes in China face south.

She elaborates: “Archeologists have found that many Neolithic-period houses were rectangular with a south-facing door. Zhou period settlements were also organized on a north-south axis. These early dwellings no longer exist, but houses in China, the earliest of which date from the Ming dynasty, also show a tendency to face south. Houses built today are also built facing south, if space allows.”

Ebrey’s study delves into the importance of orientation. Today these considerations have developed into the practice of feng-shui, which literally means “wind and water” but is often translated as geomancy.

And what about trees and gardens? Unless one resides on unlimited acreage, details such as these must be considered. For any contemporary project with a green orientation, managing details like these in the front end will pay important rewards at the finish line.


« The Importance of Attic Insulation for Energy-Efficiency