The tragic earthquake in Christchurch, New Zealand, has left much of the city in ruins, killed more than 75, and left hundreds missing. Even as survivors continue to be dragged out of the rubble, and survivors reel in their shock, it’s worth looking forward to how the city might be rebuilt to better deal with disasters like this in the future. Building for disaster resistance might be expensive today, but in the long run it is the very height of environmental and fiscal responsibility, as it prevents the great waste and expense of having to rebuild later. And this is without even considering the steep human cost of poor construction.

But first, let us step back and talk a bit about what causes structural damage in earthquakes like the one Christchurch has just experienced. Earthquakes are highly stressful events. Bear in mind that I don’t mean this in the psychological sense, even though this is certainly true, as anyone observing the shocked citizens of Christchurch wandering the streets on the TV can attest. Rather, I mean this in a physical sense; earthquakes place lots of physical stresses upon buildings, particularly lateral stresses due to back and forth motions that conventional buildings are poorly designed to cope with, and when those stresses overcome the structural integrity of a structure, it collapses. There are two ways to deal with this; you can either take a conventional building design, and reduce the stresses acting upon it, or you can change the design to relieve stresses more effectively. Lets look at each in turn.

A conventional building can be simplified as a box on a platform, or foundation.

The reason this basic design is so common is that it is a good compromise between the cost of construction and materials, and interior volume. But watch what happens if the ground shifts suddenly to the left or right.

Because of conservation of momentum, the top of the building moves more slowly than the bottom, and so if you were to take a snapshot of a box structure during an earthquake, it would look much like this. While a box is very good at resisting gravity, when you add in lateral stresses it no longer has straight, load bearing walls. If the shaking is minor, the building will sway a bit and survive. But if the stresses are greater than that, as you can see in the illustration, this can result in a part of the building that has no real support against gravity. If this state persists for any length of time, the building collapses. And this is assuming that the building is elastic; if it has been made of stiff, but brittle, materials such as brick, the building can actually shatter due to the swaying action itself. One widely practiced solution is called base isolation, and involves placing a dampening system between the foundation and the load bearing walls. This dampener can be a lead post embedded in rubber, springs, or a set of large, very strong ball bearings in a gently sloped channel.

In any case, the dampener takes the lateral stresses, and the building does not collapse. However, the dampeners themselves can be damaged in the process of absorbing this energy. And while it is better for the people to survive than not, it would be best if the building could be saved as well.

Another, more recent development, is the use of a large, tuned pendulum mass damper, attached to the upper floors of the structure, and often equipped with mechanisms to move it actively in opposition to strong forces.

Essentially, this works to give a building a sense of balance like we do. This technology functions very well to absorb the damaging stresses by simply moving a very large mass in the opposite direction to the force. The forces cancel out, and the building does not sway and collapse. The benefit of this technology is that it is more durable than technologies that are at the foundation level, and it’s easier to repair since the device itself is not load bearing. Many super skyscrapers in seismically active areas now have an active, tuned pendulum in them. In the case of the Taipei 101 skyscraper in Taiwan, the pendulum is suspended from the 92nd floor, and weighs a staggering 660 tons! In 2008, the pendulum worked well to cancel out earthquake forces, as seen in this video:

But perhaps the answer lies not in augmenting conventional structures, but in adopting unconventional designs. A good place to start would be to ask what sort of structures have proven to be resistant to earthquakes over long periods of time, like thousands of years. Take, for instance, the Hagia Sophia in Istanbul.

Dedicated in 360 AD, the building has served as a church, a mosque, and a museum ever since, despite the fact that the city it is in has been repeated destroyed by violent earthquakes. Why has it survived? Because the greater part of the structure is not a box, it’s a series of domes. Domes (and their planar cousin, the pyramid) distribute lateral forces very well for three reasons. First, and foremost, even movements strong enough to get a dome to sway will not produce areas of the structure that have no support against gravity, because the base is much wider than the top. Second, domes distribute forces in all directions naturally, and thus the design is much better at dissipating energy. And third, most of the mass of a dome is low, and this lower center of gravity greatly reduces the chance of collapse.

So, why aren’t our cities made up entirely of domes and pyramids? Well, pyramids have less internal volume than an equivalent box, so that’s one reason, thoughmany skyscrapers have been made in a pyrimidal shape in geologically active areas. But domes actually have more volume than an equivalent box, albeit in a form that is a bit harder to utilize. So, in light of this, why are domes so rare?

Because, until recently, domes were very hard to build. Basically every piece that goes into a dome has to be custom made, and until the keystone is in place the structure is actually rather fragile. However, two recent building techniques have changed this, and made domes far easier to build, easier, even, than conventional structures. 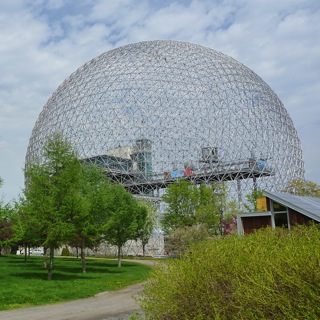 The first technology is the geodesic dome, a structure composed of repeating icosahedrons covered by a protective skin.The use of repeating geometry allows for large parts of the building to be built from standardized pieces, which both cheapens and simplifies construction, and the geometry allows for the building to be both strong and lightweight. But the geodesic dome has a flaw. The weak point has long been the ‘skin’ itself; glass is too heavy to be easily used for this purpose, and if it breaks free of its frame it can be very hazardous to the people inside, and lighter composites like acrylic pose a fire hazard. As a result, the geodesic dome has become less popular over the past few decades. However, recent breakthroughs in composite glasses that are light, strong and fire resistant, may cause a resurgence in this design. Fun fact; the invention of Geodesic domes are usually credited toBuckminster Fuller, but in fact he only developed the mathematics that explains how the structures are so stable. The actual inventor is a German man by the name of Walther Bauersfeld, who built the first dome of this type for the Carl Zeiss company to house a planetarium.

The second modern dome technology, one that is quietly becoming more and more popular on both a large and small scale, is the monolithic dome. Monolithic domes differ from geodesic domes in a few ways; they are very heavy, and they are formed in one piece. Building one requires the use of some sort of form, either a mound of dirt in earlier models, or an inflated airform in more recent constructions. After the form is in place, insulation, rebar, and concrete are sprayed onto the inside or the outside of it. As this cures, it forms a single, reinforced piece that makes up the entire structure. Over the past several decades, monolithic domes have proven to be extremely disaster resistant, defying tornadoes, earthquakes, and cyclones. Due to their largely concrete construction, they are even fire resistant, and should last for hundreds, or even thousands of years if well maintained. Even better, as the technology has matured costs have fallen to the point at which they are comparable, or even cheaper, than conventional structures, and considerably cheaper than conventional earthquake resistant structures. Once you consider how much more energy efficient monolithic domes are than conventional structures, it’s hard to deny that they could play an important role in the creation of sustainable, disaster resistant cities. At this point, the only thing holding them back is the NIMBY attitude that is holding back so much sustainable technology. Domes look very futuristic or even weird compared to box structures. But, after a disaster, a standing dome is much better looking than a smoking pile of bricks, so it might be wise to get over it and start building domes everywhere!

Crossposted at The Trip for Life

QR Codes Part II: How Contractors Use Them »