Green Parking Garage Not All It Appears 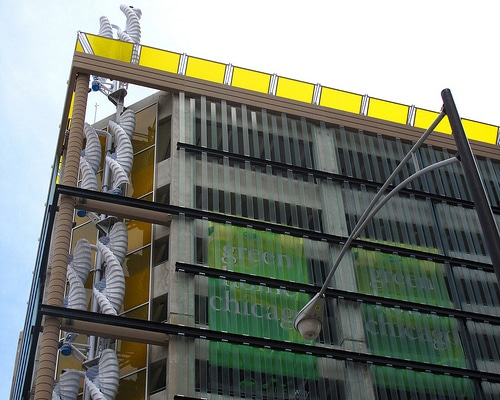 The Greenway Self Park garage is being touted as Chicago’s first green parking structure.  But controversy shrouds this claim, as the garage’s largest green features, artistic wind turbines running down the southwest corner of the building, may not be doing the job they were designed to – generating energy.

From the outside the building is quite a sight.  Between the helix-shaped wind turbines and open-air glass cladding that catches the sunlight, it looks nothing like a typical parking garage in Chicago.  The cladding is made up of strips of glass attached to steel beams, providing natural ventilation for the building.  This eliminated the need for an HVAC system, saving energy and money.  The open-air exterior also allows lights to be dimmed or turned off during the day.  But these may be about the only green features in this building that live up to their billing. 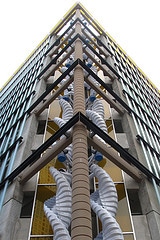 The magnificent turbines set on the corner of the building provide a majestic sight.  However, it appears they may not be working as well as hoped.  Local writers have noted that the turbines hardly move, ever, and only during a major wind event.  This can be attributed to the surrounding structures protecting the turbines from the full force of the wind.  This effect should have been accounted for in the design, and the turbines placed so that they had the greatest wind exposure.  In fact, the project’s turbine designer left the design team due to concerns that the placement was more aesthetic than practical.

Then there is the question of how a building that encourages people to drive cars can possibly be considered green.  There is the argument that cars are here to stay, so let’s build the greenest building we can to help deal with them.  The garage has 6 vehicle charging stations and 6 hybrid parking spaces (out of 720 total spaces).  While this helps, it seems to be too little, too late.

According to a post on the Chicago Tribune, the project is seeking LEED certification, and plans to claim the credit for being near bus and mass transit lines.  This seems almost laughable given the building’s purpose.

This is just another caution to not judge a book by its cover, and a very compelling argument for measuring the performance of green buildings to verify that they are living up to their promises.

Photos courtesy of John Picken through a Creative Commons License.