The Problem When Trash Meets Ocean

This past August, the Ocean Conservancy set sail with San Francisco-based Project Kaisei to expand research and help with some cleanup on the massive trash vortex that exists in the North Pacific Gyre. Four boats joined in the journey, including a barge for hauling away trash from this “Great Pacific Garbage Patch.”

The North Pacific Gyre is an area located between California and the Hawaiian Islands where trash from around the world – much of it plastic – has been trapped by four converging ocean currents. Some estimates say the gyre is twice the size of Texas, others argue the size doubles that of the United States.

The actual size of the garbage patch is a great question, says Nick Mallos, Nick Mallos, a marine scientist and member of Ocean Conservancy’s marine debris program who joined the expedition. He describes the trash vortex as being more like an archipelago in character, with parts being clear ocean, while other parts are dense and deep with trash.

Mallos collects data on microplastics, parts that have broken from bottles and packages into very small pieces that almost resemble confetti.  “There was this shimmering gleam of color because the water column just below the surface was littered with these objects. I was just astonished,” says Mallos. “In certain areas, the top three to six feet of water is absolutely dense with these microplastics. If you wave your hand in the water, you come up with these fragments on your hands.”

Joining on the expedition was Project Kaisei, an ongoing ocean cleanup initiative of Ocean Voyages Institute that tested ways to remove plastic from the ocean and find alternative uses for the trash like that shown in the left photo. Since 1986, over 7.8 million volunteers have removed and documented 135 million pounds of debris threatening our ocean, lakes and rivers. 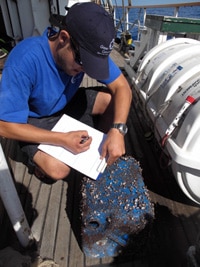 The 2010 expedition set out with a small fleet of three to four boats, including a barge, which will allow the team to bring back much larger amounts of debris than in the previous 2009 expedition. The team looked at remediation techniques, which include turning plastic into fuel, or other products, which can create a value for what is being removed from the ocean surface. The team also tested scaled-up trash catch methods. The report will be published in early 2011.

One goal of the expedition: to bring together new technologies, innovations, and capabilities that can both help clean some of the plastic debris from our ocean, as well as prevent it from entering in the first place.

In the course of four days through a part of the garbage patch, Mallos (left photo) reports he and the team counted over 16 thousand pieces of micro plastics that were visible in a 10-meter swath in front of the boat. Plastics represented 95 percent of the junk they found. Mallos points out that the entire issue of human trash in the ocean is a challenging undertaking for the world population.

” As consumers, we need to systematically reevaluate our daily behaviors, and make choices like drinking from reusable bottles, eliminating our use of one-time shopping bags, and recycling,” Mallos says. “The sea of debris I confronted in this remote part of the ocean underscores the global nature of the problem and its magnitude. We need to devise a collaborative effort that incorporates consumers, businesses, manufacturers, and government. Together, we can craft marine debris solutions to mend our periled ocean ecosystem.”