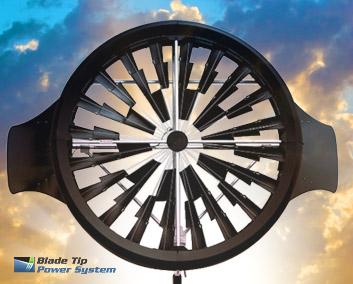 As is shown in the picture below, standard windmills generate power in the center of the fins.  They are often quite noisy and produce a lot of vibration, one reason they are sometimes difficult and expensive to get permitted.  Most models are quite heavy and require additional structural bracing, making retrofits a challenge.

The new turbines have moved the power-generating magnets to the tips of the blades.  The benefit of doing this comes from the increased speed of the blades at the tips.  Increased speed equals more power generation, and less wind is required to start generation.  The turbine starts generating power at 2 miles per hour (mph) and continues to generate up to 45 mph.  At that point, the power is diverted to a brake system that keeps the turbine in control.  The system, including mounting hardware, is rated for winds as high as 140 mph.

The unit also weighs considerable less than a windmill, coming in at 185 pounds and standing just over six feet tall.  A roof cap is all that is needed to install the system on a residential rooftop.  The manufacturer recommends that it be installed at a minimum height of 33 feet and be unobstructed to get the best power production.  According to Department of Energy wind tunnel testing, the turbine can produce up to 1,500 kWh per year, which is approximately 15-20% of an average home’s annual energy.  Because the noise and vibration are significantly less than a windmill, the system has been permitted more easily in areas where it is being tested.

Now for the important information – cost.  The turbine itself will retail for $6,500, with installation estimated at $3,000.  The system can be installed by a licensed electrician.  Many states and the federal government have healthy incentives that can cover 30-80% of the cost through tax credits and rebates.  For detailed information about the viability of a wind turbine and estimates of the incentives available in your area, visit the WindKnowledge site.

Graphics and photos courtesy of WindTronics.


« Moving Air in Habitats Without Ducts