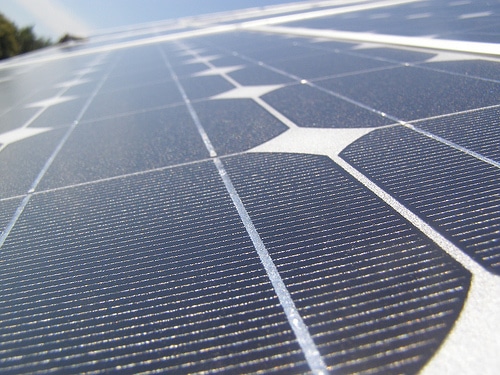 Researchers at the Oregon Built Environment and Sustainable Technologies Center (BEST) are looking to silicon as the source of greater efficiency for solar panels.  Using crystalline silicon, they plan to devise a new process for harvesting the sun’s rays and turning them into electricity that will be up to 5 percent more efficient, and hopefully less expensive.

Current photovoltaic technology is only 13-14 percent efficient, with the highest efficiency being about 22 percent.  “With any photovoltaic, anything you do to try and improve efficiency usually makes it worse.  But if we could find a practical and inexpensive way to improve the function by even 5 percent, that would be a big deal,” says Stephen Kevan, a physics professor and lead project investigator with the University of Oregon.

The science of the process is complex, but basically current panels do not efficiently capture invisible light, such as blue and ultraviolet.  These light colors are instead released as waste heat.  If researchers can devise a way to capture those higher frequency light waves, panels would be more efficient.  The key to efficiency is the creation of electrons.  A process called impact ionization can cause electrons to decay and create more electrons.  It is this process that researchers hope to tap into.

BEST researchers will begin growing their new crystalline silicon film in the fall, and are hoping to have it ready for testing next summer.  “The chances of us producing something useful are very small,” Kevan says.  “But if it works, it will be picked up in most photovoltaic systems.  We’re trying to amplify the usefulness of an existing material.”

The research is being funded through a grant from the National Science Foundation.  BEST does research to benefit the green building, clean energy, and bio-fuel industries.

Photo courtesy of Andreas Demmelbauer through a Creative Commons License.