Who knows? Perhaps one gateway out of America’s economic doldrums will come from a boom. There are plenty of people looking at what was once just regarded as a tropical and oriental product, bamboo.

As writer Harry Sawyers noted over a year ago in Popular Mechanics, “Bamboo has come into vogue as a green, sustainable resource that’s used for everything from cutting boards to clothing to wood floors. But until now, almost all of the bamboo in products sold here has come from overseas. That could change soon, as new planting techniques may lead to millions of new acres of bamboo shoots in the American South.” Some wonder if a plant like bamboo can revitalize farmland on the Mississippi Delta.

The American Bamboo Society (ABS) was formed in 1979. Today it counts over 1,400 members living throughout the U.S. and in 37 other countries. For those who are interested, the ABS issues a bimonthly Magazine and the Journal to disseminate information about the use, care, propagation and beauty of bamboo. 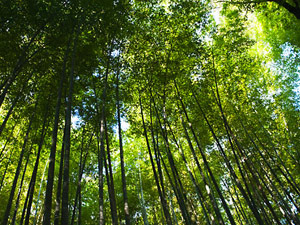 Of interest, bamboo is regarded by many as a wood product, due to its hardness and durability. In reality, though, it is a grass. Considered the largest of the grasses, there are over 1600 species of bamboo, 64 percent of which are native to Southeast Asia. Thirty-three percent grows in Latin America, and the rest in Africa and Oceania. In North America there are only three native species of bamboo as opposed to the 440 species native to Latin America, writes master garden products

Bamboo varies in height from dwarf, one foot (30 cm) plants to giant timber bamboos that can grow to over 100 feet (30 m). It grows in many different climates, from jungles to high on mountainsides. Bamboos are further classified by the types of roots they have. Some, called runners, spread exuberantly, and others are classified as clumpers, which slowly expand from the original planting.

Author Paul Schneider has written prolifically about his love affair with bamboo, providing a cornucopia of information about growing the grass in colder climes.

“Bamboo has proven to be an aesthetic asset to our garden here in Cambridge, New York (north of Albany on the Vermont border; confirmed Zone 4). It mixes well with many other plants both perennial and annual. Depending on the species, it can be used as a tall or medium background plant, a “statement” plant or as a low border or ground cover plant.”

For others, it is grown more as a wood product. “To grow bamboos,” writes Schneider, “New England gardeners must be willing to accept the challenge of working with a plant that normally doesn’t grow in their climactic zone. And they must also understand that the taller bamboos will not grow to the height they would reach in Zones 5 or warmer.”

According to Patrick Malcolm, Golden Bamboo was the first of the Phyllostachys bamboo cultivars to be introduced into the United States, in 1882. In Alabama, where bamboo was to be primarily used as a fast growing windbreak, it was planted by southern tobacco farmers. The poles from the golden bamboo have probably landed more fish in the southeastern U.S. than any other means of fishing, hence the name, fishing pole bamboo.

For those wanting bigger and better, there is Giant Timber bamboo. Its dark green to golden stalks that grow to 100 feet tall, featuring 6 inch poles that are 6 inches in diameter.

There are fundamental ROI issues to regard, writes Sawyers: “Getting the revenue flowing could prove to be the biggest obstacle. Unlike cotton, which promises a return on investment at the end of a single growing season, bamboo crops must mature for three or four years before they’re ready for the first harvest.”