Hybrid cars are gaining in popularity thanks to sporty models like the Toyota Prius. These vehicles prove to the average consumer that you can drive a more fuel efficient vehicle without making a big trade off in style or power from a traditional gas only vehicle.

These types of hybrids, known as parallel hybrids, still rely on gasoline. At low speeds they use an electric motor which is charged when the car breaks. At high speeds, however, the regular gas engine switches on to provide extra power; thus two engines working in parallel.

Electric only powered vehicles have been around for awhile but have not caught on like hybrids have. Chevy’s upcoming Volt, a plugin electric vehicle, hopes to change this and replicate Toyoto’s success with the Prius. The car will be able to drive at least 40 miles on pure electricity, stored in its battery from overnight charging. After that the gas engine turns on to help extend it’s range.

Electric vehicles are an important next step in our nations struggle away from gasoline. But if these catch on, our nations power grid will struggle under the increased demand for electricity as more of us plug in to charge our cars. And while power plants may produce energy cleaner than they did years ago, according to Wikipedia, scientists agree they still account for a significant portion of greenhouse gas emissions.

As it stands, electric vehicles are still no more sustainable than traditional gas powered engines. Clearly, a better solutions is needed. One that can produce clean and sustainable energy, sufficient enough to fully charge our cars battery. 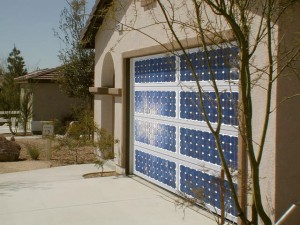 Solar panel technology has reached a point where they can be installed just about anywhere. So why not on the garage door?

A solar panel garage door could provide the energy needed for our cars. Think about the possibilities. You pull out of the garage in the morning, driving your electric vehicle, emitting zero emissions. While you’re out, the sun shines on your solar panel garage door. When you come home, you plug in to that stored energy to recharge for the next day. Sustainable. Clean. Efficient.

The technology exists today. There just isn’t enough demand to warrant it. But if vehicles like the Volt reach critical mass, a solar panel garage door may not be too far behind. And if that happens, we may find ourselves entering a much greener world.