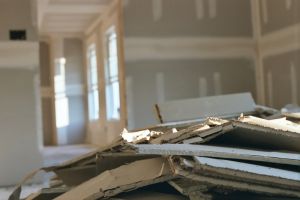 As if Florida’s housing market hasn’t had enough bad news lately, it now seems that some homes built with imported Chinese drywall have experienced problems ranging from rotten egg odor to appliance failure, and in some cases health problems.  The culprit, according to homeowners involved in class action lawsuits in Florida, Louisiana, and Alabama, is high levels of sulfur within the drywall.  The corrosive gas has destroyed copper wiring, causing air conditioners and other appliances to fail.  Some homeowners claim the drywall has caused health problems, including headaches, sore throats, insomnia, and swollen joints.

During the boom years of 2005 and 2006, when frenzied new home construction combined with post-hurricane reconstruction, home builders found some material, including drywall, in short supply, and looked to cheap imports to fill the need. The gypsum used in the drywall, plaintiffs claim, originated in a Chinese mine with toxic levels of sulfur, though the companies that sell the drywall deny this claim.  It is estimated that the number of homes with Chinese dry wall could be as high as 50,000, with Florida accounting for as many as 30,000.  Time Magazine asks “Is Drywall the Next Chinese Import Scandal?“

Health and maintenance complaints over the last two years have led to numerous investigations and lawsuits.  This month, after the U.S. Product Safety Commission launched an investigation into the drywall, homeowners launched a class-action lawsuit against home builders that used the drywall.  If you have concerns about the drywall in your home, contact your state’s health department.

Last year, we at Green Building Elements and Green Building Talk highlighted the staggering amount of CO2 produced in the manufacturing of drywall, the most common indoor building material in the United States.  One company, Serious Materials, found a way to produce drywall without gypsum, significantly reducing production of CO2 and eliminating the source of the volatile organic compounds in the Chinese drywall. For those who want to be sure of their indoor air quality as well as reduce their carbon footprint, the EcoRock drywall from Serious Materials is a good place to start.

As Safe As Houses »