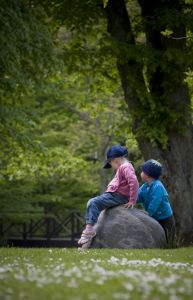 A new study in the December 2008 issue of the American Journal of Preventive Medicine suggests that an increase of green space in a neighborhood may decrease the chance for childhood obesity among neighborhood children.

In the study, researchers from the University of Washington, Indiana University-Purdue University and Indiana University School of Medicine followed more than 3800 children aged 3 to 16 over a two year period. Using satellite imagery, the researchers found that of the predominantly African-American and poor children studied, those who lived near greater concentrations of green space had a greater chance of lower body mass index (BMI.) Children whose activities were limited to streets and sidewalks faced greater risk of childhood obesity than those who had access to open spaces such as yards, parks, or vacant lots.

This study finds that what is good for adults may not be good for children. A previous study done by the same researchers found that higher urban concentrations led to less driving and more walking by adults, and a corresponding drop in BMI.

While green space has been a vital part of the green movement, it has not carried much weight in green building. Landscaping is addressed in green building programs, but more from a water-saving perspective. Green lawns have begun to carry a negative connotation as a water sucking luxury. Perhaps this study will change that perception. The US Green Building Council has established LEED for Neighborhood Development, which focuses more on the development of environmentally friendly buildings and the increase of public transportation than on the increase of green space in the neighborhood, though it does promote “active public spaces.” It would be interesting to see if this study finds a magic number of necessary green space in a neighborhood – perhaps the USGBC can incorporate that number into LEED for ND.

The dangers of childhood obesity are many: type 2 diabetes, asthma, hypertension, sleep apnea, and emotional distress. Since children who are obese are likely to be obese as adults, they are in greater risk of cardiovascular disease, high blood pressure, and stroke, not to mention far greater health care costs in general.

Picture by Dez Magner via stock.xchng

Fall in Love with the Future of the Tree House! »