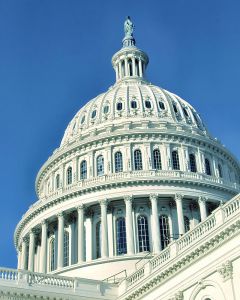 Unfortunately, the Senate and House could not agree on how the continuation of tax credits would be paid for. In the past, such cuts were paid for by eliminating tax breaks for hedge fund managers and from tax increases on oil profits. With no progress made by the end of the session, these tax credits would disappear at the beginning of 2009. A coalition of renewable energy industry representatives warned that billions in research and hundreds of thousands of alternative energy jobs would be lost if the tax credits were not renewed. As of last week, this seemed the likely outcome. The Wall Street meltdown and the failure of the House to pass a bailout bill have given the tax credits new life.

The halls of Congress, which were supposed to be closed this week, were instead the center of the world economic crisis.  The House surprised many in Washington by voting down the first proposed bailout bill.  In an effort to appeal to a wider range of voters in the House and Senate, members of the Senate have attached to a new bailout proposal various additions, including the extension of alternative energy tax credits.  Though the process is far from over, it seems that the once dead alternative energy tax credits have been given new life with the Senate bailout plan.

Of course the alternative energy tax credits are a tiny part of the new bill, which has the support of the White House and the presidential candidates but faces tough opposition by many in the House and Senate.  In addition to their reluctance to bail out Wall Street, House members may not appreciate the Senate’s maneuver.  Even if the bill passes the Senate, it will face a tough fight in the House.

What the finished bill could contain:

It is also worth noting that while previous bills from the House and Senate included versions of the above incentives, they also included provisions supporting oil shale and coal-to-liquid fuels, two carbon-heavy processes that environmentalists are very much against.