Utility-scale windpower is an important and growing part of the US energy portfolio. Farms ranging in size from dozens to hundreds of turbines can produce in excess of 60 megawatts of power. Plans for gigawatts of wind power are being proposed all over the globe, and new wind farms are regularly being proposed that outstrip one another to be the largest in their respective locations, or in the world. At the far end of the scale, the largest size wind turbines have a rotor diameter of 126 meters (413 feet), and are estimated to be capable of producing 20,000,000 kilowatt hours of electricity annually (enough to power as many as 5000 European homes). Since the power generated by a turbine increases exponentially as it gets larger, new turbines will continue to grow in size.

But small-scale turbines are perhaps a more exciting realm of development. The standard, propeller-style turbine is well established, and there are many suppliers for this kind of generator in a range of sizes. In 2007, Home Power Magazine had a roundup of more than a dozen small wind turbines ranging from 8 feet to 56 feet in diameter (the latter of which is far larger than even a large, inefficient household would need for their power requirements). Green Building Elements had a review of this article last year.

Besides the propeller turbine, there are a number of other options that are being developed and coming into availability that offer different features and performance that can make them appealing alternatives for some. 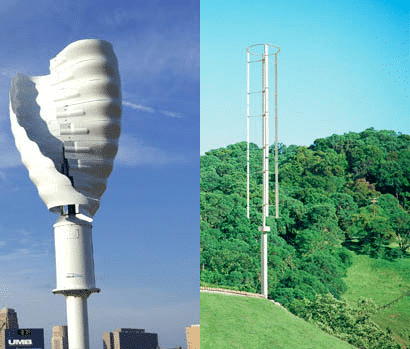 In theory, vertical-axis wind turbines are thought to be better suited for urban locations, where winds are more swirling and less consistently directional. With a rotor that spins around an upright axis, wind coming from any direction can turn the blades and provide power. On the downside, the power produced by a VAWT is less efficient because, during part of its rotation, the rotor is moving against the wind.

Vertical-axis turbines are also generally quieter than horizontal, propeller style turbines. Their cylindrical form also lets them go into places with less space available, which also makes them well suited for urban uses. Another benefit of vertical turbines is that they generally appear more solid, which makes them less of a hazard to birds and bats.

The Windspire is one newer VAWT that is being aimed at the home-power market. It is a very narrow cylinder only 2 feet (61 cm) wide, but 30 feet (9.1 meters) tall. Another VAWT, the HelixWind presents an even more solid-looking presence, with scoop-like solid rotors in a helical configuration. The Windspire rotor is wider and shorter – 4 feet x 8.7 feet (1.2 x 2.7 meters) than the Windspire. Helix Wind also has a taller version with twice the rated capacity. 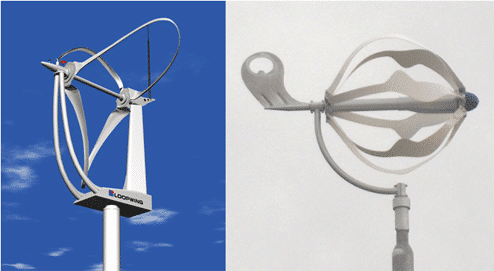 More than a year ago, we first learned about the Loopwing, an unusual turbine from Japan that offered extremely quiet operation and redundant safety systems to prevent overspeed in high winds. The noise reduction is due to the configuration of the blades, which return to the shaft, rather than having exposed tips. This eliminates the vortices that are produced by the tip of the blade moving through the air which is the source of much of the noise created by a turbine.

Another turbine has recently been introduced with some similar characteristics. The Energy Ball looks like a variant on the Loopwing concept, though with more blades. However, the Energy Ball is a small turbine only slightly more than one meter in diameter, with a rated power of only 100 watts (0.2 kW). Even in a very windy location, this small turbine is unlikely to do much on its own to reduce your energy bills because of its small level of output.

Swift makes a turbine that is much like an ordinary horizontal-axis turbine, but unlike other propeller style turbines, though, its five blades are connected together with a ring. This makes it a hybrid between a propeller turbine, and a turbine like the Loopwing or the Energy Ball. The ring helps to cut down on noise, most of which comes from blade tips traveling through the air, not unlike the Loopwing or the Energy Ball.

AeroVironment has another turbine designed for direct mounting on a building parapet. The AVX1000 is designed for commercial use only. Aerovironment’s turbines can be installed with a decorative canopy that may also lessen the likelihood of bird impacts.

Both the Swift and the AeroVironment turbines are displayed in building parapet installations where they are only a short distance above a building roof. They may be taking some advantage of the increase in wind speed that occurs at a building roof. But when the wind is blowing parallel to the face of the building, these turbines are likely to be fairly ineffective.

Evaluating and comparing wind turbines is still a difficult task. Different manufacturers list information about their turbines differently, so straightforward comparisons between units can be difficult. Some manufacturers list the output based on the maximum output, which is typically far in excess of the average wind speed a site is likely to experience.

Furthermore, how a turbine performs at different wind speeds also affects its output. Some manufacturers list an annual power output (in kilowatt hours, just like electric service is typically billed) but that is based on an estimated average annual wind speed, which may not be the same as the average wind speed a potential user’s site may experience.

Another factor is the “cut in speed” of a particular turbine, which is the wind speed at which the turbine starts turning. Some minimal amount of power may be produced at this low speed, but it is only a tiny fraction of the turbine’s rated speed. A turbine with an especially low cut in speed will start turning in a lighter breeze, but that doesn’t mean it is going to be producing much power at those wind speeds.

Wind power has not been quite as readily accepted for home power generation for several reasons. First of all, wind power has greater requirements for open space and access to wind for efficient operation. By comparison, solar is much easier to accommodate, especially on a small site. Solar is also far less obtrusive than wind power. Solar panels located on a low slope roof or in a back yard are often almost invisible to passers-by, while wind turbines need to stick up into the air where they are able to catch the wind. Some people find this objectionable, which can sometimes make it more difficult to obtain the necessary permits for the installation of a wind turbine. Any system with moving parts is more prone to breakdown and trouble than one that is solid state, which also contributes to wind power being less desirable for homeowners who do not also want to be turbine mechanics. Wind turbines also can produce noise and vibration. This, too can be objectionable to neighbors, as well as making it less desirable to mount the unit directly on a building. However, there are cities where zoning laws are being changed to allow for wind turbines to be installed with fewer regulatory hurdles.

Home wind power is still a small niche compared with solar. Far fewer homes are suitable for personal wind turbines than homes that can accommodate solar panels. But wind is part of the renewable energy mix, and there certainly are many homes where is is a viable option. For those, the range of options is growing.