Weighing the Value of Concrete Housing 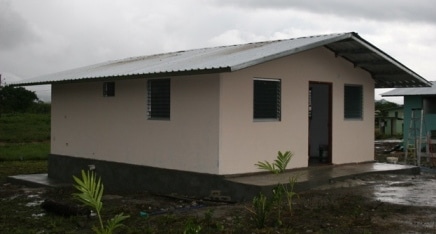 A South African company called Moladi is promoting their system for quickly building homes. Using their system, the exterior walls for a single-family dwelling can be built in a matter of just a day or two, and it can be done using unskilled labor. But, while their goals are admirable, it’s a question whether or not this is a really green method of building.

The system uses lightweight formwork panels, much like those used for poured concrete walls. Once erected, the forms are filled with mortar (concrete without stone) which can be hand-mixed and hand-placed, or which can be mechanically mixed and pumped into place. Typically, the formwork can be removed the day after the mortar is poured. The result is a smooth finish material, little more than a roof is needed to complete the building.

On the downside, this material uses 250 kilograms of portland cement per cubic meter (about 420 pounds per cubic yard), making it fundamentally the same as a concrete building with an enormous carbon footprint stemming from the extensive use of cement in these buildings.

There are some benefits to a system such as this, however. For one, the construction is fast. Once the formwork is set up, it takes a day to pour the mortar, and the formwork can be stripped the next day. This allows for the rapid construction of multiple dwellings in a short period of time. The work is simpler in setting up, filling, and taking down the forms, so it can be carried out by unskilled laborers (though this falls into the give-a-man-a-fish/teach-a-man-to-fish question that may not be serving the greater needs of the community). The buildings which are monolithically cast are also stronger and more earthquake-resistant than structures built of brick or concrete block.

But, in addition to the enormous carbon footprint associated with extensive use of cement in these buildings, there are some other aspects of this building system that make it more problematic. Electrical conduit and plumbing piping as well as window and door openings are all cast into the walls. While this is touted as an advantage (and in some cases it would be) in comparison to the practice of cutting into masonry to recess piping and wiring into the wall, it is no more flexibility to repair or renovate.

The thermal performance of Moladi is also problematic. A 100mm (3.9 inches) Moladi wall has a comparable thermal performance to a 150mm (5.9 inches) masonry wall or to a 370mm (14.6 inches) concrete wall (nearly 4 times as thick). But, given concrete’s poor thermal properties, that’s not saying all that much. (This is about the same R-value as an uninsulated single-pane glass window provides.) For any sort of a climate where heating is a necessity, this material is obviously a poor choice.

Reducing the amount of material used in a house could help turn around some of the environmental negatives of this building method. Even using this system to build only the exterior walls of houses, and having the interiors built out by local workers would reduce the carbon footprint of these buildings substantially, as well as providing for more flexibility. It would also open up opportunities for local workers to contribute more, and potentially earn a higher wage for their work.

The tradeoffs are not an easy thing to dismiss, however. From a triple-bottom line perspective, rapid, low-cost home construction meets an important human need, and that weighs strongly in Moladi’s favor; it helps house people. But from an environmental perspective, the massive amounts of cement used in this process make it a poor choice; it’s bad for the planet. It is an example of how competing goals must be weighed, and some of the potential environmental costs in trying to do something good.