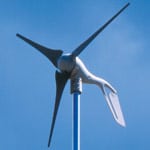 Residential applications for solar panels have been making news for several years. But as rising fuel prices spur consumers to look for alternate energy sources, another clean power source is beginning to get attention: wind energy.

Even though the residential wind power sector has seen tremendous growth over the last decade, an article in The Arizona Republic estimates that there are still only 4,000 residential wind turbines nationwide. The primary reason that wind energy has been slow to take hold is that wind turbines are fairly visible, and therefore highly controversial, installations. According to the American Wind Energy Association, small wind systems (100 kilowatts or less) need to be at least 30 feet above barriers which might break the force of the air currents reaching the turbine. Right now, the industry recommends wind turbines only for sites that are at least one 1 acre in size. Consequently, wind turbines in urban areas are still quite rare. (In a September 2007 post, earth2tech featured a San Francisco home which sports a turbine, and pointed out that this may be the first urban wind turbine in the country.)

Unfortunately, individual efforts to experiment with wind power, even in outlying areas, have encountered a lot of roadblocks. Proposed turbine installations are usually evaluated by local governments on a case by case basis, since most city zoning laws have height restrictions which would implicitly prohibit turbines. Oftentimes, even if permission is granted and a turbine is erected, neighbors unite to fight the decision. (For individual turbine projects that have made news for seeking exceptions to local codes, see these articles on Wayne, New Jersey and Atlanta, Georgia).

Some locales are at last beginning to address this issue in a more systematic way. In a Green Building Elements article last week, Philip Proefrock cited Chicago as an example of a city that has amended its building code to allow rooftop wind turbines. Similarly, San Francisco’s mayor recently formed a “Residential Wind Power Work Group,” which will research the feasibility of urban wind power installations and make recommendations on changes to local building and zoning codes. The Denver Post reported in January that the Denver City Council had enacted an ordinance that would significantly ease restrictions on commercial wind generators but would also give homeowners a break on property line setbacks from the current 20 feet to 10 feet.

Even some small communities seem to be taking a proactive stance by agreeing to examine local codes. Blaine County Commissioners in central Idaho recently agreed to look into changing their zoning laws. According to an article in the Idaho Mountain Express last month, this valley area is not particularly suited for utility-scale wind farms, but many homeowners have indicated an interest in supplementing their own power systems.  In a February article in the Casper Star-Tribune, Natrona County, Wyoming, has also declared its support for residential wind power, although changes to the zoning rules have not yet taken effect.