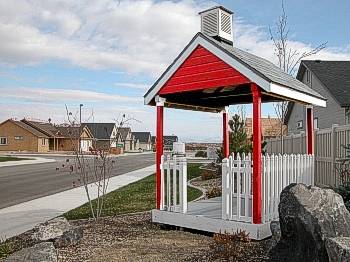 Smaller homes are more energy efficient generally, and consume fewer resources for their construction. In the United States, the average house size has been skyrocketing in the past few decades from 983 square feet in 1950 to almost 2,350 square feet in 2004.

Smaller buildings are potentially more affordable, are better suited to livable neighborhoods, and serve the needs of smaller families (while our houses have more than doubled in size since 1950, the size of the average family has actually decreased in that same period). There are already developers who understand this, but sometimes, the municipalities make it impossible to build smaller homes.

Marty Pieroni, a developer in Kuna, Idaho was turned down on his request to build some houses smaller than the 1,400 square foot minimum set by the city. With rising energy costs and the current housing credit crunch, there is an increasing demand for smaller, more efficient houses. But the city government (whose tax base is determined by the value of the developed property within its bounds) does not want to allow smaller properties and has turned down the request.

According to an editorial in the Idaho Statesman, ‘Kuna, with nearly 15,000 people, has pushed bigger houses on builders and developers to prevent the community from forever being tagged as a city of inexpensive starter homes. The city today routinely makes the 1,400-square-foot minimum a condition developers must meet.’

The developer has proposed building 20 smaller (1,250 square foot) homes in a subdivision where a 1,400 square foot minimum size was already set. If the concern is taxable value, smaller homes can be built with better materials in order to keep the property values up. Better materials are often also those which last longer, which also betters the environmental impact of the building by needing less frequent replacement.

The average size of a new home in Kuna last year was 1,945 square feet. But, that is more than many people need. A 1,250 square foot house (which, by way of disclosure, is larger than the house my family of four lives in) is still plenty of house for a single occupant.

‘Pieroni said several prospective customers recently told him they wanted homes in his subdivision, but didn’t need 1,400 square feet. A single woman wanted a house to be her last before she dies. A man sought a home for his mother. Pieroni asked to build homes at 1,250 square feet. He said a well-designed, 1,250 square-foot house would not detract from the values of nearby, larger homes. “Small doesn’t mean cheap,” he said. “One hundred and fifty square feet less than somebody else isn’t going to ruin a subdivision.”‘

Kuna is far from an isolated instance. There are many such cases where sometimes well-meaning laws and regulations work at cross-purposes to making a better environment.  Reasonable strategies for more sustainable practices in building (as well as in other fields) need to be given wider consideration.  As a positive example, the City of Chicago, which has been fairly progressive and accommodating of green building practices, recently amended its building code to specifically allow wind turbines on rooftops to exceed building height limits.