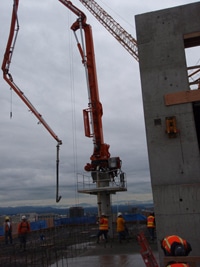 In April, the not-for-profit industry association Green Roofs for Healthy Cities released its 2007 lists of the Top Ten Cities for Green Roof Installations. The Top Ten cities in the U.S. are as follows:

For lists of 2007’s top ten cities in North America and Canada, see the Final Report of the Green Roof Industry Survey.

Pacific Northwest Needs to Get Back in the Running

Furthermore, Seattle has a historical precedent for finding creative ways to incorporate vegetation into its built environment: in the 1970’s, the city created Freeway Park, a 5-acre green space which spans a downtown stretch of Interstate 5. Angela Danadjieva, the Project Designer for Freeway Park, is quoted as recalling “an early visit to Seattle during which the city’s pollution made her eyes water and that compelled her to consider the pollution abating attributes of vegetation. She was quite anxious about the project as there was no precedent for building a park over a freeway”.

Seattle has also kept pace with current trends in green roofing when it comes to the construction of government buildings. But according to an article in the Puget Sound Business Journal, the city does not offer enough financial incentives to make it worthwhile for private developers to adopt the technology. Last year an article in Environmental Health Perspectives discussed some of the incentives that cities across the nation are implementing. These include grants, fee reductions for city services ranging from permit processing to stormwater management, faster processing of permits themselves, and ‘density bonuses’ — allowing an increase in buildable area in exchange for installing green roofs. (The city of Portland offers such a bonus.)

The situation in Seattle may be moving in the right direction, however. Developer R.C. Hedreen, who was allowed to increase the height of the company’s Olive 8 project downtown in exchange for donating money to enhance King County’s rural habitats, is set to install the city’s largest green roof — 14,500 sq. ft. — at the Olive 8 property itself. The 39-story building, which will house both a hotel and condominium units, was topped off earlier this month. This fall, plants which are maturing off-site will be moved to the roof of the tower. The drought-tolerant, native species, are expected to reduce stormwater runoff by 25%, and will help to lower overall downtown temperatures.

Chicago has topped the Green Roofs for Healthy Cities’ U.S. and North American lists for four years in a row, and its success stems not only from creating a solid menu of incentives for developers, but by implementing some regulatory requirements, as well. Many cities across America are hesitant to interfere with the market by instituting regulations, but the data from the Green Roofs group seems to suggest that a continued growth rate (in terms of a city’s total square footage of green roofs) depends upon city governments’ willingness to provide a wide range of financial incentives to the private sector.