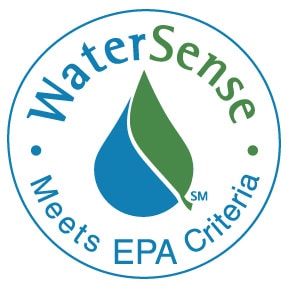 Get to know this symbol because chances are it’s going to be as ubiquitous as the blue star of EPA’s other conservation program, ENERGY STAR. Launched in 2006 the EPA’s WaterSense program seeks “to enhance the market for water-efficient products and services by building a national brand for water efficiency.” Viewed mainly as a program for water-only products like toilets, faucets, and irrigation systems, WaterSense does not include appliances, like dishwashers or clothes washers, that use both water and energy – those remain under the ENERGY STAR program. In 2007, the EPA released WaterSense specifications for high efficiency toilets and high efficiency bathroom sink faucets. They also offer certification programs for several irrigation professionals, include golf course irrigation auditors. Specifications for showerheads are in the works.

WaterSense is about to become very popular in the green building community. In their proposed changes to the LEED programs, the US Green Building Council removed some specifications for water saving credits, replacing them with, “WaterSense-certified fixtures and fixture fittings should be used where available.” It’s much easier to check for the WaterSense label than it is to gather the specifications for every fixture.

Though some companies were already offering fixtures compliant with the WaterSense standards, they are only recently getting literature out to the public about their WaterSense labeled fixtures. Expect to see it popping up everywhere.

Other articles on water conservation: