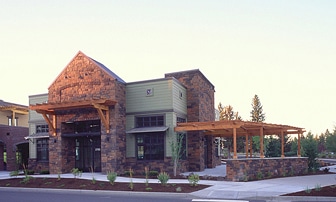 In the 1980’s, New Urbanism catapulted into the national consciousness. Today, a site called The Town Paper lists hundreds of Traditional Neighborhood Development (TND) Neighborhoods from all over the world. And this surge of interest in mixed use planning may be helping pull environmental building practices into the spotlight.

To receive a higher-level rating from LEED than we were initially pursuing was exciting for everyone involved in this project. This certification just reinforces our commitment as a community, on both the residential and commercial sides, to sustainability and environmentally friendly practices.

The building also won the Grand Award for Green Building in the 2008 Awards of Excellence administered by the National Commercial Builders Council (NCBC) of the National Association of Home Builders (NAHB).

Consumers’ rising interest in traditional neighborhood design coincides with their rising interest in sustainability, so developers are making green design part of their package. And harnessing the collective action of entire communities should make it possible for an increasingly broad range of building types to go green.

Can Sprawl be Green? »