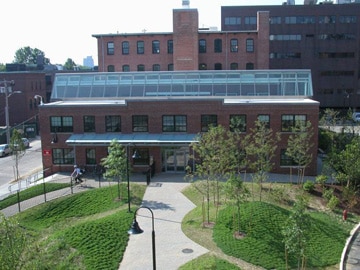 Harvard University has achieved several firsts with the recent renovation of an old power plant into an office building. It is the first LEED Platinum certified university building renovation, as well as Harvard’s first Platinum building. More interestingly though, it is the first Platinum building built before the turn of the the century–last century, that is.  Further, the university was able to complete this building without an increase in the up-front construction costs.

The original building was built in 1888 as a power station for the city of Cambridge, and in the 1930s it became a steam plant to provide heat for the university.

As a Platinum-level building, the Blackstone building has an impressively long list of environmental features that were incorporated in the renovation, with such features as removing an existing impervious parking lot and making it into a green space with pervious pavers; 43% building water use reduction with dual-flush toilets and low-flow fixtures; ground-source heat pumps and a mechanical system that is 42% more efficient than a baseline system; nearly 100% construction and demolition materials recycling; and a range of low-emitting carpets, paints, and other interior finish materials.

The building is also now home to a number of previously scattered departments on Harvard’s campus, including the Harvard Green Campus Initiative, which helped to drive the project to this level of accomplishment. The HGCI has operated as a business within the university to promote and develop green buildings on campus leading to Harvard’s becoming one of the greenest campuses in the country.

But perhaps the most impressive feat in this renovation, HGCI was able to achieve the Platinum certification for the Blackstone building with no additional upfront costs. This is the latest in a string of excellent examples that demonstrate that building green does not need to be about expensive add-ons, but can be incorporated into the fundamental way the building is built.