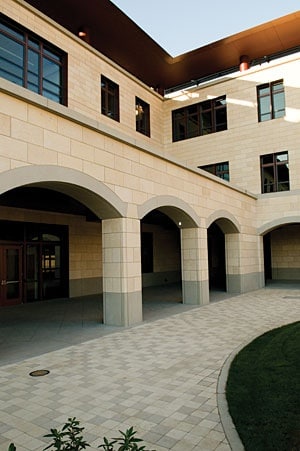 It is possible to learn something in school. It’s even more possible to learn about sustainable building if you happen to be a student at Stanford or walk through the campus. In another push toward collegiate sustainability Stanford University proudly unveiled the Y2E2 (or for those less technical, the Jerry Yang and Akiko Yamazaki Environment and Energy Building). Yes, the same Jerry Yang of Yahoo! fame.

The design engineers project the Y2E2 to use 56 percent less energy and 90 percent less potable water for fixtures than a comparable “dirty building.” How will it do that? From foundation to rooftop, the building offers various energy recovery and on-site power generation, as well as passive and active systems.

From top to bottom, Y2E2 has an array of sustainable features that fall under five categories: load reduction, passive systems, active systems, energy recovery and on-site generation. These five approaches are expected to slash the building’s power consumption by more than half. The four large atriums which serve as central light wells made us and the interior bask in the glow of natural light. Although not as glamorous, the nifty light shelves catch additional light and reflect it into the building.

As for on-site generation, that refers to the three different kinds of solar panels mounted on the south-facing roof—including a system that tracks the sun. The system, which will probably generate about two percent of the building’s total energy usage, will serve for educational purposes.

Even beyond operational sustainability features, Y2E2 used a substantial amount of fly ash, a byproduct of coal burning, as a replacement for cement in the concrete of the basement walls and all the floors. This process produced 15 tons less carbon dioxide. Additionally, they used plentiful amounts of recycled steel. Finally, I like the carpet. What carpet? They left most of the floors uncarpeted which saved tons of raw materials.