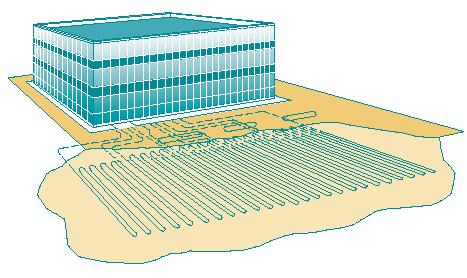 Although they sound like they are different terms for the same thing, geothermal energy and ground source heat pumps are two different systems, with little in common other than that they are making use of what lies below the surface of the Earth. They do it in very different ways, however.

A geothermal energy system uses heat from below the surface of the earth as an energy source, much like solar panels capture sunlight and convert it into useful energy (electricity or hot water). A geoexchange system with a ground source heat pump (GSHP) is more akin to a hybrid automobile. It is not a method for generating energy, but a method for more efficiently using energy. It still takes energy input to operate a GSHP system, but a GSHP can be as much as 300% to 400% more efficient when compared to highly efficient furnaces, which are typically in the high 90s for efficiency percentage.

Geothermal systems are best suited for larger applications. They are not the kind of thing that can be scaled to single-family house size very effectively or efficiently. Ground source heat pumps are available for single-family residences, as well as for larger installations such as office buildings.

Geothermal systems are also very dependent on the local geological conditions. In much of the western US, underground temperatures escape from the earth’s core The energy comes from the same underground molten rock that leads to the volcanoes along the Pacific Rim and powers the geysers and hot springs that are found, perhaps most famously, in Yellowstone National Park. Tapping the venting steam from an underground geyser and running it through a turbine is fundamentally similar to coal-powered electricity generation. But instead of burning coal to create steam to drive the turbines, the steam comes from the hot temperatures inside the Earth. Directly tapping geyser steam is less effective for power generation, because the naturally produced steam from belowground also contains large amounts of dissolved minerals and tends to quickly corrode and destroy the turbine equipment. A more effective method for producing steam is to locate a spot with sufficient underground temperatures and then inject water underground to be heated and returned to the surface as steam which drives the turbines.

While a geothermal heat plant would not work in most of the eastern US, ground source heat pumps can be installed almost anywhere. They do not have to be limited to locations which have active geothermal activity. Also, ground source heat pumps are more akin to residential furnaces, and GSHP installations make good sense for residential applications in most locations.

Heat pumps use compression and expansion to transfer heat. An air conditioner is essentially a heat pump that compresses and expands a refrigerant within the closed-loop system to create cooling. Ground source heat pumps rely on the relatively even temperature of the earth below the surface. At a depth of 5 or 6 feet below the ground, the temperature is relatively stable year-round. Timothy Hurst recently posted an article on Cleantechnica that included this introductory video about geoexchange with GSHPs.

A heat pump circulates water (or an anti-freeze solution) through underground loops where it is a relatively stable 45-50 degrees (F). When heating, the system starts with water at that ground temperature, instead of freezing or sub-freezing winter temperatures aboveground. By using the heat pump in conjunction with water at a more moderate temperature, 3 or 4 units of effective heating can be extracted from a single unit of energy, leading to efficiencies of 300% to 400% for GSHP systems. Even better, because a modern heat pump can be run backwards, both heating and cooling can be provided using the same equipment, and the most efficient uses of GSHPs are in mixed climates that need both heating and cooling.

While the easiest GSHP installations are on lots with large areas of open land surrounding them for the installation of the loops in trenches, ground source heat pumps can also be used in tight, urban installations. For locations without large areas of open land available, vertical bores, rather than horizontal trenches, are used for the loops. It is more expensive to drill a couple-hundred feet for a vertical bore (and multiple vertical bores are needed for even a small, single-family installation) than to cut relatively shallow (typically 5-6 feet) trenches, but this allows even a high-rise building in the middle of a city to take advantage of GSHP systems.