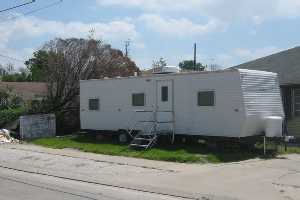 Today’s news included the story that testing on FEMA-supplied temporary housing trailers in Mississippi and Louisiana has found extremely high levels of formaldehyde in the air, despite earlier reports issued by FEMA indicating that there was no problem.

Tests by the Centers for Disease Control and Prevention on more than 500 trailers in Louisiana and Mississippi showed formaldehyde levels that were five times higher than levels in a normal house. The levels in some trailers were nearly 40 times what is normal.

The CDC is saying that people living in these trailers “should move out quickly — especially children, the elderly and anyone with asthma or another chronic condition.”

While there is no federal standard limit for non-workplace formaldehyde exposure, formaldehyde is a toxin, an irritant, and a carcinogen. Some formaldehyde is to be expected in almost any instance when wood is present simply because some slight amounts of formaldehyde are naturally present in wood; however, high levels have been associated with eye irritation, breathing irritation and difficulty, and with triggering asthma attacks. The World Health Organization Working Group on Assessment and Monitoring of Exposure to Indoor Air Pollutants has concluded that indoor formaldehyde concentrations of less than 0.06 PPM were of limited or no concern while a “concentration of concern” was above 0.12 PPM.

Reducing formaldehyde levels is one of the goals of LEED measures for improving indoor air quality. Materials used in construction such as OSB (oriented-strand board), fiberglass insulation, and many adhesives all contain formaldehyde and will emit formaldehyde fumes for long periods of time. Because of these concerns, steps should be taken to minimize the use of materials that will offgas formaldehyde indoors. Extensive flushing of the indoor air prior to occupancy can help further reduce exposure to unsafe levels of formaldehyde.