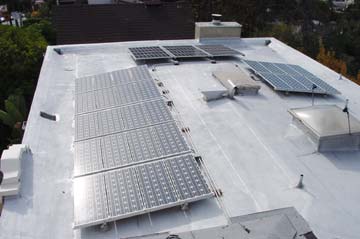 Safety concerns are going to start being an issue with alternative energy installations. With any new technology come unanticipated concerns, as that system leaves the ideal world of the drawing board (or the computer simulation) and enters the real world.  We are already well acquainted with the concerns about wind turbines and birds (for the most part, the issue of bird strikes is not that great compared to other man-made hazards for birds, and is more than offset by the benefits to birds (and all other living creatures) from using a renewable power generation. But there will also be life-safety issues around any electricity generating system, particularly as they become more distributed and widespread.

What kinds of safety issues will be faced as part of other alternative energy systems?

One concern is unexpected voltage in power lines. As a safety measure, in many places, grid tied systems are already required to shut down when the power on the grid goes out. This serves to protect line workers working to reconnect electrical service from accidental electrocution if the ‘receiving’ end of the circuit is actually carrying current. The downside to this is that, without a building cutoff to isolate the building, it won’t have any power available, in spite of the generating equipment, in the event of a blackout. But this is one of the safety measures that is needed to go along with more widely distributed generation sources.

A recent article in Commercial Building Products magazine (unfortunately not yet available online) discusses some of the issues that were raised by fire officials when reviewing the net-zero energy IDeAs Z-Squared building in San Jose, California. The Z-squared building is a zero net-energy and zero carbon (hence Z-Squared) building owned by a consulting firm dealing in efficient buildings. Part of the adaptive reuse of the building the firm occupies was the installation of 30 kilowatts of solar photovoltaic panels, and this raised some concern with local fire officials:

“‘The first things firemen do if a building is burning is cut the power to the building so they can spray water, and take axes and cut holes in the roof to let smoke out,’ said Kaneda. ‘Both of those actions are dangerous with photocells on the roof. First, cutting the power to the building from the [photovoltaic] cells still leaves the actual cells ‘live,’ so if a fireman were on the roof preparing to chop a hole in the roof, he could be electrocuted.'”

This is also a problem that has been pointed out with hybrid electric cars which have battery packs and electrical cables running through the vehicle with more current being carried than emergency response personnel may be familiar with. Police and firefighters are being trained to deal with the special considerations when a hybrid vehicle is involved in an accident. Auto manufacturers are making special guidelines available for safety and rescue personnel to enable them to safely respond to an emergency.

As with hybrid cars, unfamiliarity on the part of rescue personnel should not be used as an excuse to continue with the status quo and to forego implementing alternative energy systems. Concerns about these systems should be constructively addressed, rather than shutting out new systems because they are a new peg that doesn’t fit an existing hole. Building codes are constantly undergoing review and development. Energy codes, in particular, are getting more and more stringent. Other requirements, too, are subject to changing regulations. As renewable energy systems progress and become more widely distributed, I expect that there will be standards for individual power systems that will maintain adequate safety while allowing the growth in alternative energy systems.


« Make Your Windows Safe for the Birds